Will the deluge end? 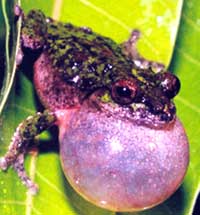 wildlife ecology debates always wildly swing from doomsday oracles of decimation of species to the exotica of the never-before-found species. The discovery of yet another frog in the Western Ghats has again brought to the fore the controversy about the constant pressure on ecologists to find new species. The new frog, from the genus Philautus, has been described from Wayanad district in Kerala by S D Biju and Franky Bossuyt, in a paper published in Current Science (Vol 88, No 1).

Philautus nerostagona, the paper claims, differs from other frogs of the same genus by the combination of webbed fingers, nearly fully webbed toes and a distinct dermal fringe along the outer margin of the fore- and hind limbs. Its features suggest it inhabits the upper layers of the rainforest.

The genus Philautus is characterised by direct development, a specialised reproductive mode without a free-living larval phase, which is usual for most frog species. But the number of species for which direct development has actually been observed remains limited. Most species seem to lay their eggs either on the ground, or on leaves.

This is not the first time that Biju and his collaborators have been credited with discovering new frog species in the Western Ghats. In fact, the last few years have seen a tremendous surge in the foraging activities by ecologists in South Asian forests. Almost 200 new frog species had been discovered in Sri Lanka in 1998 and later reported in Science. But several renowned amphibian experts, including M S Chaitra, Karthikeyan Vasudevan and Kartik Shanker, had criticised such hasty classification for showing discrepancies as well as taxonomical problems.

"It is not a good practice to declare new species without doing a comparative study against other known species from South Asia, even earlier we have pointed this out. Comparison with only a few species in a selected region is scientifically not rigorous," Chaitra told Down To Earth. In 2004, the three had co-authored a paper that said, "We do not dispute the claim that there are several undescribed taxa of amphibians in Sri Lanka and the Western Ghats (and in many other unexplored areas in the region such as the Andaman and Nicobar Islands). Rather, we suggest that the evidence presented is incomplete."

These experts had also pointed out the great pressure and the lure to declare forest areas as "species rich" by splitting existing species into two. The criterion for designating hotspots is species richness of iucn 'endangered' species. Hence, many studies tend to use methods that inflate species richness, because large projects (read monies) come only for 'species rich' areas. While the controversy rages on, India is bound to reveal more natural gems as scientists comb the forests more systematically than ever before.