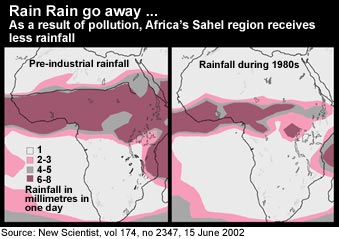 tiny pollutant particles, known as sulphate aerosols, emitted by power stations and industries from the us and Europe have played an important role in causing catastrophic droughts in the Sahel region of Africa. These were the findings of a research conducted by Australia-based Commonwealth Scientific and Industrial Research Organisation (csiro), in collaboration with Canada's Dalhousie University. The research is pioneering, as it is the first to establish a link between sulphur emissions and disrupted regional weather patterns of the poor nations.

In the past 30-40 years, Sahel -- a loosely defined band across Africa, just south of the Sahara and including parts of Ethiopia in the east and Guinea in the west -- has suffered the most sustained drought seen in any part of the world, with precipitation falling by 20-50 per cent. During the worst years, up to a million people had died because of starvation. Till recently climate experts were clueless about the reason behind this cataclysm. Now, they have nailed down the culprits: sulphate aerosols, which are formed by clouds of sulphur that are emitted when fossil fuels burn. "As the sulphur compounds move through the atmosphere, they create aerosols that affect cloud formation, altering the temperature of the Earth's surface and leading to dramatic shifts in regional weather patterns," says Leon Rotstayn, one of the researchers from csiro.

To prove their theory, Rotstayn and his colleague Ulrike Lohmann of Dalhousie University ran a simulation of global climate that included interactions between sulphur dioxide emissions and cloud formation. When the researchers included huge amount of sulphur emissions from the northern hemisphere emitted during the 1980s in their model, the Earth's surface in the north cooled relative to the south, driving the tropical rain belt away from south, causing droughts in Sahel. However, simulations without aerosol pollution showed no drought in Sahel.

Further support for the researchers' findings came from the fact that there has been a considerable reduction in the severity of the Sahelian drought during the 1990s. Rotstayn attributes this to the 'clean air' laws introduced in North America and Europe in response to another environmental crisis -- acid rain. "Sahel's drought is due to a combination of natural variability and atmospheric aerosols. Cleaner air in future will mean greater rainfall in this region. However, we are not yet seeing reductions in aerosol emissions," says Rotstayn.

According to him, the findings are a reflection of the fact that global climate change is not solely caused by rising levels of greenhouse gases. Atmospheric pollution also has an adverse affect and until such emissions are reduced, poor regions such as Sahel would continue to suffer. "The research should wake the world up to the harm that aerosols can do. At present, in the push to convince people about the reality of global warming, climate experts are neglecting the impact of aerosols, partly because they can also have a cooling effect," says Habiba Gitay of the Australian National University, Canberra.