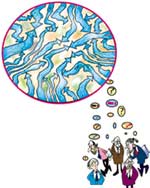 the proposed plan to link 37 major rivers in India may hit the very source of precipitation for these rivers. This warning was issued in an article published in the January 10, 2006 issue of the journal, Current Science. The report, an outcome of a one-day meeting of scientists from a few premier research institutes of the country, suggests that the reduced runoff from some rivers targeted by interlinking -- a sure consequence of the project -- could adversely affect the amount, duration and spatial distribution of monsoon rainfall received by most regions in India.

The article seems to be on sound scientific grounds. Its authors surmise that sizeable reduction of fresh water runoff to the Bay of Bengal may, over a period of time, alter the present state of the Bay. They rightly note that unlike other oceans, the Bay of Bengal maintains a low-salinity layer whose thickness varies between 10 and 20 metres during different periods of the year.

This low-salinity region, spread over a third of the Bay of Bengal, owes itself to the runoff from some of the rivers targeted by the interlinking project, and plays a critical role in sustaining monsoon rainfall in major parts of the country. The region is a prime reason for India receiving nearly 4 per cent of the global precipitation, even though it occupies only 2.45 per cent of the earth's terrestrial surface.

India receives about 70 per cent of its annual precipitation from the summer monsoon.


If the proposal takes effect, humongous amounts of water from the Ganga, Brahmaputra and Mahanadi river systems, that today flow into the Bay of Bengal, will be redirected to the water scarce regions in southern and western parts of the country. The idea had remained on paper on paper until the National Democratic Alliance (nda) government revived it, a few years back. Subsequently, the nda regime created a task force to interlink the country's rivers. The present United Progressive Alliance government (upa) initially said that the project was low priority for it. But on August 25, 2005, the first link of the project was officially formalised: in prime minister Manmohan Singh's presence, the governments of Madhya Pradesh and Uttar Pradesh signed a memorandum to transfer "excess water" in Ken river to Betwa river. At a recent meet, J Harinarayan, secretary, Union ministry of water resources, remarked that "The upa government thinks that river linking is an idea worth pursuing".

Scientists, however, feel that the government has ignored larger questions while pushing the project. "The project should have been taken up only after carrying out a rigorous scientific study, employing proper modelling and simulation experiments," says V Rajamani, professor of geology at the New Delhi-based Jawaharlal Nehru University one of the authors of the Current Science report. On Rajamani's insistence, the Bangalore-based Indian Academy of Sciences organised the meet, which led to the Current Science article. The participants included U C Mohanty of Indian Institute of Technology, Delhi, R Ramesh of Ahmedabad-based Physical Research Laboratory (prl), Prasanna Kumar of National Institute of Oceanography, R K Kolli of Indian Institute of Tropical Meteorology, Pune, and G S Bhat and other scientists of the Indian Institute of Science Bangalore (iisc). Also present was another scientist from the iisc, P N Vinayachandran who, in 2002, had collaborated with two scientists of the National Institute of Oceanography in Journal of Geophysical Research article, which showed for the first time that freshwater inputs from river runoff are critical to the Bay of Bengal's low-salinity layer.

The meeting deliberated upon the existing knowledge on the Bay of Bengal and its land-atmosphere linkages. The participants noted, "The estimated freshwater influxes into the Bay of Bengal from local precipitation and through river discharge are 4,700 and 3,000 billion cubic metre (bcm) per year respectively. The Bay loses only 3600 bcm per year. Thus, its annual freshwater input far exceeds the loss due to evaporation. This makes the Bay relatively less saline compared to other oceans." Says Rajamani, this also helps the ocean maintain its low salinity area, and in turn influence the monsoon rainfall in most parts of the country.


The density of seawater increases with salinity. The Bay of Bengal's low-salinity zone is therefore a layer of less dense water that floats above denser waters below. Scientifically referred to as stratified layering, the phenomenon prevents mixing of surface water and the cooler waters below. Solar energy gets trapped in the top 10-20 metre-thick non-saline layer, keeping the sea surface temperature (sst) higher than other oceans. This is critical for rainfall. According to meteorologists, low pressure formation that causes monsoon begins at 28 c but peaks at 29 C. But while other oceans, including the Arabian Sea, take almost a month to increase their sst by 1 c, the corresponding time required by the Bay of Bengal is just 4 to 5 days. Its warmer low-salinity zone enables the Bay of Bengal to effect this temperature change, faster. This is very significant, considering that even small changes in the sst influence rainfall. "This relation between the low-salinity layer in the Bay of Bengal and the monsoon rainfall was established scientifically during Bay of Bengal Monsoon Experiment in 1999," says Vinayachandran.


Scientists also say that global circulation model studies have shown that its low-salinity zone also helps the Bay of Bengal retain freshwater from the river discharge closer to the coastal region during the monsoon period. And, then around the beginning October every year, when the monsoon withdraws, this water flows along the coast of India and around Sri Lanka into the southeastern Arabian Sea; here it plays a vital role in warming of the Arabian Sea during the pre-monsoon months. "This clearly shows that the effects of the rivers that originate in the Himalayas are not just local, but spread out over a large area on an annual scale," the Current Science article observes.


Says R Ramesh, a biological oceanographer with prl, the disappearance of the low-salinity region can lead to an increase in marine phytoplankton population. Currently this layer prevents vertical mixing of water between the rivers dense and rare zone, and this in turn inhibits supply of nutrients from below, restricting phytoplankton growth. The Bay of Bengal does have an abundance of phytoplankton, but the productivity of these creatures is only one-fourth of that found in the Arabian Sea. Increased phytoplankton population might lead to a growth in the Bay's population. Scientists fear that this fecundity would work to the ocean's detriment. The planktons will take away lots of oxygen from the Bay and will lead to the development of the oxygen minimum zone, just as in the Arabian Sea. Oxygen dependent bacteria would be replaced by nitorgen dependent ones, causing denitrification -- the release of nitrogen oxide into the atmosphere. Nitrogen oxide is 20 times more potent greenhouse gas.

Scientists have other worries. Says Rajamani, the country's coastal ecology will be completely altered after the construction of more than 250 mega dams envisaged by the river linking project. "In normal course, nature maintains equilibrium by constantly replenishing delta regions with sediments to offset those taken away by the sea or lost due to subduction. But the dams will reduce or even stop the supply of sediments from rivers and this in turn will accelerate sea erosion in the deltas," he apprehends. The sea erosion triggered by dams was best documented by a team of researchers in the Andhra University, Visakhapatanam in a 2004 Current Science paper (See "Sea change", Down To Earth, December 15, 2004). The scientists led by Kakani Nageswara Rao of the geo-engineering department of the university found the fertile delta region lost 18 sq km between 1976-2001 as a series of dams built on the river Godavari river and its tributaries blocked sediment flow.

Rajamani and other contributors to the Current Science article have called for more research to assess the impacts of river linking. The potential consequences of the project inferred in the report are based on existing knowledge on the Bay of Bengal. "There is a definite need to create more credible datasets on land, ocean and atmosphere so that simulation models can be prepared," they argue. This will help establish the relation between the runoff input to the Bay of Bengal and the monsoons. more accurately. Significantly, currently no official data is available on how much water or at what rate water from these rivers will be diverted as part of the river linking project.