Unpredictability associated with monsoons will only increase as global temperatures rise 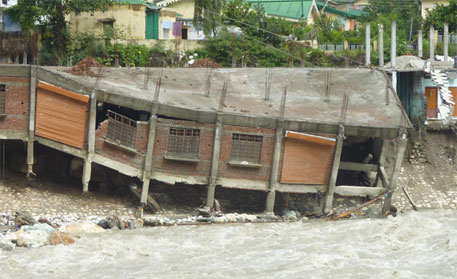 Northern India was caught unawares when monsoons hit the region earlier than usual. Events that unfolded over the past three days are proof of that. Even though the rains were a welcome respite from the heat wave, the rains had another unusual character to it.

News reports and television news used words such as “heavy downpour” and “unprecedented rainfall”. But the right word to describe these rains, though, is “extreme” and the rainfall of the past three days can be called an “extreme rainfall event”.  Uttarakhand received 220 mm rainfall on June 16 (Sunday), Delhi received 58.5mm rainfall, all within a span of 24 hours. Yamuna is set to cross the danger level in Delhi. And, the impact of the “extreme rainfall” ranged from traffic snarls and water-logging, including at the Delhi airport, to flash floods that damaged property and claimed lives in the Uttarakhand hills, leaving several thousand pilgrims stranded there. Preparedness of the authorities was also minimal since monsoons hit early. And this is reason for concern since the unpredictability associated with such events will only increase in future.

A study by the Indian Institute of Tropical Meteorology (IITM) in 2006 states that while there was a significant rising trend in the frequency and magnitude of extreme rain events  between 1951 and 2000, the frequency of moderate events during the period was on a decline. And yet, monsoon rainfall over the past century in India has remained stable. How is that possible? That is because the relative contribution from decreasing trend of moderate events is partially offset by the increasing heavy rain events. The study also establishes that there will be a “substantial increase in hazards related to heavy rain” over central India in the future. While the study is specific to central India, scientists stress the need for more detailed assessments all over India and admit that the current downpour over northern India is an extreme rainfall event and that the country will experience more of such events in the future. The reason for the long-term increase of daily rainfall variance is because of the warming trend of Indian Ocean sea surface temperature between June and September.

“There are 122 monsoon days a year. Ideally, rainfall should be temporally and spatially distributed in this period, but does that happen? No,” says M R Ramesh Kumar, chief scientist at the Physical Oceanography Division at National Institute of Oceanography (NIO) in Goa. “You will find that the total amount of rainfall is more or less the same over the 122 days, but the distribution is not the same. It may rain unusually one day, like it did now and then there is a gap before it rains unusually again. This is called prolonged monsoon break and it is not good,” Kumar adds.

R Krishnan, scientist and executive director of Centre for Climate Change in Pune, adds that the current rains in north India are proof of an unusual event. “This is partly linked to monsoon, but I am yet to explore why this happened. We have to look at more than 30 years of data but in many places monsoon rains have increased and extreme rainfall events have also increased,” says Krishnan.

Another scientist at IITM quotes a study published in the journal Science in 2006 and says, “It is established that in central India extreme events have been on the rise and are expected to increase.”

Extreme rainfall may result in landslides, flash floods and crop damage that have major impacts on society, the economy and the environment. Although prediction of such extreme weather events is still fraught with uncertainties, a proper assessment of likely future trends would help in setting up infrastructure for disaster preparedness. Explaining why extreme rainfall events are bad, Ramesh Kumar of NIO says, “You need to eat breakfast, lunch and dinner everyday. Supposing you are on fast for seven days, it will be bad for your body to overeat. Similarly, it is bad if it rains unusually on one day and then there is gap and then it rains unusually again. Besides, monsoon this year has come one month in advance. There are bound to be repercussions.”

According to the 2007 report of Intergovernmental  Panel on Climate Change, “wet extremes are projected to become more severe in many areas where mean  precipitation is expected to increase, and dry extremes are projected to become more severe in areas where mean precipitation is projected to decrease. In the Asian monsoon region and other tropical areas there will be more flooding”. A 2010 study by the Indian Meteorological Department’s National Climate Centre confirms this. “In recent years, heavy precipitation events have resulted in several damaging floods in India. The consecutive flash floods over three major metro cities in the same year—Mumbai in July 2005, Chennai in October 2005 and again in December 2005 and Bangalore in October 2005—caused heavy damages in economy, loss of life,” the study says.

Analysis of one-day extreme  rainfall series showed that the intensity of extreme rainfall has increased over coastal Andhra Pradesh and adjoining areas, Saurashtra and Kutch, Odisha, West Bengal, parts of north-east India and east Rajasthan. There has been significant decrease both in intensity and frequency  of extreme rainfall over Chattisgarh, Jharkhand and some parts of north  India. The flood risk also increased significantly over India. The flood risk was more in the decades 1981-90, 1971-80 and 1991-2000.

Meanwhile, the government of India seems to be in denial even as science suggests there is an increase in extreme rainfall events. Referring to the recent rains in north India as “isolated events”, K J Ramesh of the Ministry of Earth Sciences says, “There will be pockets of heavy rainfall, which are determined by local events. Extreme events are a combination of large scale monsoon circulation and local factors such as cloud land-locking of cloud mass. This can happen in valleys, for instance.” Ramesh adds that while extreme weather events are a consequence of climate change, the current rains in north India are just “heavy rainfall events” and there is nothing “unusual about them”.