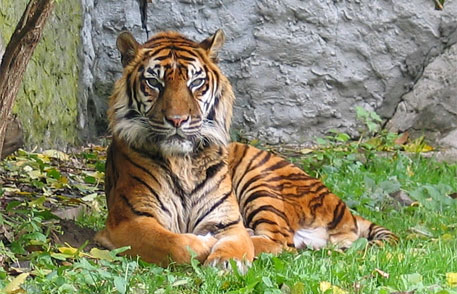 Many species, including the critically-endangered Sumatran Tiger, would benefit if consumers of palm oil pay a little higher for oil made by the companies that help to protect these endangered species, a new study by the US and UK researchers has found.

Palm oil is widely used in processed food and cosmetics. But the conversion of tropical forests to oil palm plantations has devastated a huge number of plant and animal species, including tigers, elephants, rhinos and orangutans.

The study, titled Conserving tropical biodiversity via market forces and spatial targeting, was published recently in the journal Proceedings of the National Academy of Sciences (PNAS). It states that shoppers’ willingness to pay more for sustainably grown palm oil could create profitable incentives for producers to preserve certain wildlife habitats.

“One way to save species and biodiversity threatened by agricultural expansion is to show companies the business case for conservation,” says Brendan Fisher of the University of Vermont’s Gund Institute for Ecological Economics, in a press release. “This study shows how important it is for industry and scientists to work together to find potential win-win solutions,” adds Fisher who is also the co-author of the study.

Researchers analysed the finances of a major palm oil company to determine the impacts of conserving land on biodiversity and profits. They studied the prices firms could reasonably charge for “conservation grade” palm oil that is manufactured by companies who set aside land for conservation programmes.

For the study, researchers surveyed palm plantations, nurseries, forests and cleared land in Sumatra, the Indonesian island where tropical forests have been replaced by palm oil plantations, resulting in significant species declines.

Researchers determined that areas near existing forests were best for conservation, while areas away from existing roads reduced the impacts on company profits. They used these rules to identify which areas promoted biodiversity at the least cost to oil palm companies.

In price experiments, researchers found that shoppers were willing to pay between 15 and 56 per cent more for “conservation grade” palm oil products. The study finds that even in low-productivity regions, a 15 per cent price premium could induce a 32,000-hectare plantation to conserve up to 6,000 hectares.

“International governments have failed to stem the environmental damage caused by oil palm plantations,” said Ian Bateman of the University of East Anglia, lead author of the study. “We wanted to find a new way of halting biodiversity loss that actually becomes profitable for private companies.”