Bureaucrats sit on file, while GM mustard sails through 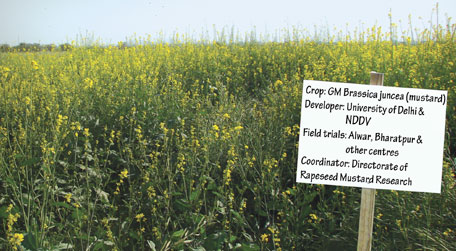 RAJASTHAN is in the eye of a storm over its policy on genetically manipulated (GM) crops. Questions are being raised over how a junior official in the department of agriculture gave permission for field trials of GM mustard even before the regulator had approved these, and how these are being conducted without the knowledge of the State Biotechnology Coordination Committee (SBCC), which is mandated to monitor the trials. But there are red faces in Jaipur Mantralaya over another issue: the delay in notifying the government’s decision to ban GM field trials that was taken over a month ago.

Down To Earth (DTE) learns that the government had decided to place a moratorium on field trials of GM crops in the state, following in the footsteps of several other states that imposed a ban last year. On February 13, the moratorium was signed by Minister for Agriculture, Fisheries and Animal Husbandry Harji Ram Burdak but the order appears to have been caught in a bureaucratic snarl. Official sources disclosed that the order is winding its way through officialdom but should be made public in a week’s time.

The hold-up is on account of a technicality. Although Burdak has signed the order, it has to be also endorsed by the minister holding charge of technical education (agriculture) Murari Lal Meena, presumably because it is relevant for the agriculture universities in the state. After it gets Meena’s approval, letters will be sent to the Indian Council of Agricultural Research (ICAR) and Genetic Engineering Approval Committee (GEAC) apart from the state agriculture universities, one of which is now supervising the GM mustard field trials.

Rajasthan’s ban will come as a major blow to biotech crop developers who have ratcheted up their demand to bypass state approvals for field trials which they say is an “unjustified and arbitrary constraint”. But states have the right to impose bans since agriculture is a state subject.

As such, the GM mustard trials appear to have just squeaked through. GEAC permission for the University of Delhi’s Centre for Genetic Manipulation of Crop Plants (CGMCP) to conduct Biosafety Research Level-I (BRL-I) trials for the second year on transgenic mustard containing bar, barnase and barstar genes was given on September 21, 2011. GEAC permission is now contingent upon a no-objection certificate (NOC) from state governments. Shrewdly, CGMCP secured this prior to the GEAC meeting but after the Review Committee on Genetic Manipulation had recommended the proposal in June 2011. However, the approval has become controversial since it was given by deputy secretary Anil Gupta and was not referred to the principal secretary, agriculture, or to the ministers.

Explaining why he had given permission, Gupta told DTE: “The request for NOC came from Deepak Pental of Delhi University in August. So we consulted Swami Keshwanand Rajasthan Agricultural University, Bikaner, which had supervised the trials last year about following all the biosafety regulations. No private company, no private individual or farmer is involved in this field trial; everything is being done by public laboratories.” The trials at three locations in the state, Naugaon, Kumher and Sriganganagar, are being done at the agriculture research stations of ICAR and Krishi Vigyan Kendra (extension service centres) under the overall coordination of the Directorate of Rapeseed-Mustard Research, Bharatpur. Pental’s project is funded by the National Dairy Development Board and the Department of Biotechnology.

But a senior official close to the development says the minister ought to have been kept in the loop before the NOC was issued. “Talk of a state ban on GM trials has been in the air for several months. Everyone knows this is a sensitive matter with political ramifications.” But as with bureaucracies everywhere, the right hand does not appear to have known what the left was doing—as in the case of the moratorium on trials.

The discomfort for those opposed to the field trials in Rajasthan is because the state is a major grower of mustard, accounting for over half the country’s crop. The possibility of contamination cannot be ruled out, points out an ICAR scientist who thinks the imminent ban is a case of the stable being shut after the horse has bolted.