Rajasthan belatedly wakes up to health crisis among mine workers

But there is no credible data available on the number of people suffering from silicosis, an incurable disease 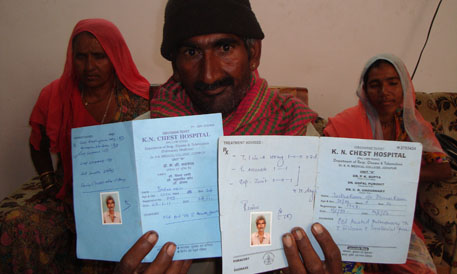 The Rajasthan government seems to have finally woken up to an occupational health hazard that has taken a toll on the lives of many mine workers in the state. The state labour department recently held a meeting to discuss silicosis, an irreversible lung disease, caused by inhaling silica dust. It afflicts workers in cement and brick factories and sandstone mines; and there is no treatment for it.

The labour department has taken cognisance of the problem only now though studies and surveys detected prevalence of the disease among mine workers some years ago. The meeting ended with certain recommendations to improve work conditions and prevent silicosis. These include wet drilling in mines to contain dust and following International Labour Organisation (ILO) guidelines for diagnosing silicosis among mine workers. Other recommendations include compensating mine workers who have died of or are suffering from silicosis and displaying data of all mine leases on website of the department of mines and geology of Rajasthan. It was also proposed that a pneumoconiosis board (to deal with respiratory disorders among workers) should be set up in every medical college in Rajasthan.

The National Institute of Miner's Health conducted a study on silicosis among stone workers from Karauli district in 2011. The study reported evidence of silicosis in 73 of 93 workers who were examined and had a history of working in mines. The study revealed that 11 people who had worked in the mines for 30 years were suffering from silicosis (see table).  Seven out of eleven miners who had worked in mines for less than ten years were also diagnosed with silicosis.

The Rajasthan government had also conducted a health survey of miners from 2008 to 2010.  The survey identified nineteen districts as affected areas and examination of workers for silicosis was conducted in nine districts: Rajsamand, Bikaner, Banswara, Bhilwara, Jalore, Ajmer, Bundi, Karauli and Jodhpur. As many as  1,070 mines were surveyed and 27,428 labourers were tested for silicosis. Twenty-nine labourers were diagnosed as suffering from silicosis and all were from Jodhpur district. This, however, may not be a correct assessment of the extent of the problem.

A former additional director of the state department of medical health and family welfare, on the condition of anonymity, said that very few miners were diagnosed with silicosis during the health survey which was strange considering they had spent a lot of time working in mines. “When the National Institute of Occupational Health (NIOH) conducted a similar study, they found several cases of silicosis among mine workers,” he said.

What compounds the problem is that there is confusion regarding the number of mines operating in the state. According to the state department of mines and geology, around 30,000 mine leases have been issued across Rajasthan. But the details available with the Centre vary. The ministry of labour has a list of only 3,706 mines; these are the ones that have informed the director general of mines and safety (DGMS) about their operations. In February 2011, the Union Ministry of Labour sought details of mine leases from the Rajasthan department of mines and geology. In 2012, the ministry again wrote to the department, seeking details. But DGMS also seemed to have no information about the actual number of mines operating in the state—the leaseholders had not informed the department, and neither did it have the staff strength or resources to carry out inspections of all the lease areas.

In the end of January 2013, the Centre asked DGMS to act against approximately 26,000 mines in Rajasthan, which had started operations without informing the department. This happened after the problem was highlighted in media reports. Senior officers at DGMS office refused to speak on the matter and said they will take steps to ensure these 26,000 mines apply to them for permission. “If DGMS is not informed about mines, then how can they regulate mining industry on aspects of health and safety?” asked Rana Sengupta of non-profit Mine Labour Protection Campaign. This is the reason Rajasthan has a high number of silicosis patients among mine workers; the Ministry of Labour does not know the exact number of mines in Rajasthan, added Sengupta.

The state government allots mine leases to the mine owner, who is supposed to inform DGMS before the commencement of operation. The lessee has to inform the chief inspector, the controller of Indian Bureau of Mines and the district magistrate in a prescribed format. After receiving the notice from mine owner, DGMS inspects the mine and gives recommendations to the owner, agent or manager about steps required for health and safety of mine workers. This is meant to ensure safety and adherence to law and protect mine workers to a large extent from exploitation.

The mine owners in Rajasthan, especially the small mine owners, do not send any information to DGMS and start production. Other industries have to obtain clearance from state pollution control board. But for a mine owner to receive rawana (revenue receipt for mining), there is no such mechanism to ensure he complies with the Mines Act of 1952 – an essential tool to ensure safety of mine workers, said Sengupta. “It is surprising that the state has turned a blind eye to such violation of the Mines Act which has resulted in the degradation of the health conditions of almost 2.5 million mine workers in the state. There is an immediate need to set up a mine workers' welfare board, similar to the Construction Workers' Welfare Board and extend the benefits of National Health Insurance scheme to mine workers. Given the state apathy towards the mine workers, it is imperative to have a mining policy and not a mineral policy, he added.

A state too ill equipped

The Rajasthan State Pneumoconiosis Board—meant to conduct medical examination, submit medical reports, and grant medical certificates to workmen employed in mines—was set up on January 21, 2004. But it is lying defunct since its inception. The Rajasthan government had allotted Rs 25.8 crore for dealing with the health hazard among mine workers in 2011-12. But the health department spent only Rs 12.77 crore from it, that too, mostly on buying new equipment like x-ray machines and Rs 1.36 crore on medicines. The department demanded another Rs 10 crore for 2012-13. The Planning Commission in its twelfth report on occupational safety and health had said that international standards in occupational health need to be adopted and strategies formulated for its implementation to properly diagnose and detect silicosis, pneumoconiosis, manganese poisoning, sidderosis and dust-borne diseases, and other diseases notified under the Mines Act.  But the state is not even able to follow the protocol for diagnosis. Health department doctors who do not have any formal training in ILO protocol required for silicosis diagnosis, are examining patients. “Doctors should be well trained and follow ILO protocol to diagnose patient with silicosis problem,” says D K Saxena, director of mines safety with DGMS.

The laxity on part of doctors has led to mine workers being misdiagnosed as suffering from tuberculosis (TB). Medication is given for tuberculosis, which means that in spite of government spending crores of rupees, there is no end to the sufferings of mine workers. Moreover, TB is a curable disease while silicosis is an incurable disease that results in slow and painful death.  “More than 2,000 former asbestos factory workers are waiting to be diagnosed for asbestosis and many mine workers are waiting to be diagnosed for silicosis. Doctors are diagnosing without recording their occupational history and as a consequence misdiagnosing silicosis as TB; thereby depriving workers of their due rehabilitation and compensation,” said Sengupta.

He added that there is a need to train doctors for diagnosing occupational diseases as per the ILO protocol  and a mechanism has to be in place to ensure that the victims receive their due compensation under the Workman’s Compensation Act and not depend on chief minister's relief fund, as has been the practice so far. Finance minister P Chidambaram, in his budget announcement last month (February 28) had said that all mine workers  will be covered under Rashtriya Swasthya Bima Yojana. It's a good initiative but mine workers in Rajasthan need much more than that.