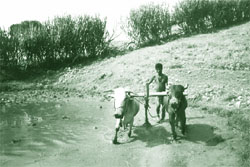 rajasthan farmers will not get water for irrigation purposes after March 15, 2001. The state irrigation ministry has recently issued a circular to this effect. The decision will affect people living in six districts. The state government alleges that the Punjab government has reduced Rajasthan's share of water from the Indira Gandhi Canal and Sirhind and Ferozepur feeders. It has released only 3,800 cusecs of water as compared to an average of 12,000 cusecs released last year. The Rajasthan government has sought intervention of the prime minister.

Rajasthan gets water from Hari Ke Barage, which is controlled by Punjab, though the Bhakra Beas Technical Committee makes allocations every month. As per earlier agreements, the Punjab government was supposed to transfer the control of the barrage to the Bhakra Beas management, but it has not been done till now.