Rajasthan HC comes down hard on polluters in Barmer district 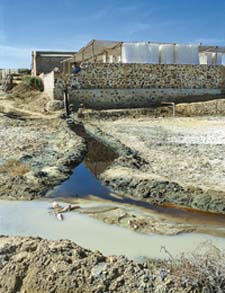 rajasthan's Barmer district administration is on a drive to shut down all erring textile colouring and printing units in Balotara area since February 1, 2007. The step comes a year too late.

The Rajasthan State Pollution Control Board (rspcb) served closure notices to 382 factories on February 24, 2006, of which, till now only 37 have been shut down. Factories operating in the Ricco industrial area were charged with violating the Water (Prevention and Control of Pollution) Act, 1974. rspcb also directed the district administration to carry out the order and scrap water and electricity connections to the erring factories with immediate effect. Five months later, rspcb send the administration a reminder and issued show-cause notices to factory owners. The district administration, however, did nothing.It is only after repeated protests by local residents that they took action.

The factories had long been fouling the locality and polluting the nearby Luni river. This prompted the residents to file a public interest petition at the Rajasthan High Court. On April 2, 2004, the court ordered the factories to connect to the common effluent treatment plant (cetp) in Ricco. Of the 382 factories, nearly 260 are not connected to the cetp, while the rest do not have rspcb's permission for a connection.

Local residents blame the administration for delayed action. They allege that the officials were hand in glove with factory owners. In a letter written to the district collector, on July 9, 2004, the Balotara sub-divisional district magistrate stated that it had complied with the court's order and shut down all erring factories in Balotara, Bithuja and Jasolhad areas. These 'closed' factories were later found operational.