Attempts to implement the PPP model have failed in many states. Activists plan to oppose the decision 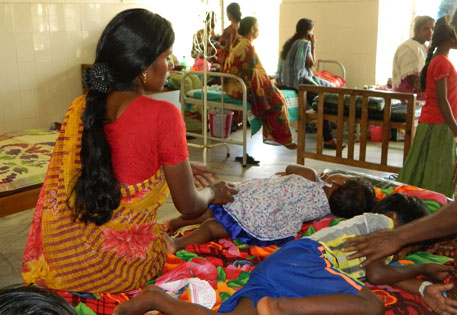 While Rajasthan Chief Minister Vasundhara Raje is at the centre of a high decibel media debate over her alleged association with Lalit Modi, one critical development in her state has slipped through the cracks and escaped scrutiny. On Tuesday, the state Cabinet gave its nod to the running of primary health centres (PHCs) in public-private partnership (PPP) mode. Similar initiatives in states like Chhattisgarh and Bihar have failed.

In the meeting chaired by Raje, the Cabinet decided that 90 PHCs of a total of 2,082 would be run by private players. Parliamentary Minister Rajendra Rathore said that the decision of running the PHCs and affiliated sub-centres in PPP mode was taken in view of the shortage of staff at these centres.

The centres will continue to provide facilities such as free medicines, free diagnostic services, immunisation and 104 and 108 ambulance services. The operators of the PHCs will provide doctors, paramedic and other staff, free OPD (out-patient department), 6-bed IPD (in-patient department), 24-hour emergency scheme, maternal and child healthcare, family planning, pregnancy registration, labour room for normal delivery, referral, vaccination and other facilities at these centres. The health centres will be allotted to private partners through an open bidding system.

But experts doubt the intention of the state government and accuse it of gradually moving towards privatisation.
Chhaya Pachauli, a Jan Swasthya Abhiyan (JSA) activist from Rajasthan, says that the government has not revealed details like the names of companies and the terms of such an arrangement yet. JSA is a group of activists working on health issues.

The biggest crisis, it is felt by experts, is that the state government is slowly moving towards privatisation of health. Recently, Rajasthan downsized its free medicine scheme and brought in a similar insurance model.

Sulakshana Nandi, a health activist from Chhattisgarh who fought her state’s effort to privatise the health sector, said attempts to hand over public health establishments to private players in diagnostic services and PHCs had failed to materialise. No private players came forward to provide health facilities in remote regions. “Obviously, these private players are interested in minimum investment and maximum gain. Why these private players will go and serve those rural areas where government has failed to retain its employees?” she asks.

Local groups in Rajasthan are planning to protest against government initiatives to privatise public services like health and education.