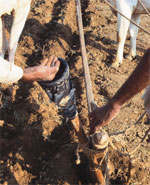 ON NOVEMBER 4, the Rajasthan government called seven seed companies to its offices in Jaipur to give them the bad news: the memorandums of agreement (MoUs) signed last year to collaborate on agriculture research had been scrapped after being in limbo for 15 months. The public-private partnership (PPP) envisaged in the agreements was comprehensive and of far-reaching significance, at least in the case of one, that with Monsanto Company of the US, the world’s largest purveyor of seeds and biotechnology.

The MoUs had been inked over six weeks, starting July 2010, with two of the world’s leading agri-biotech companies, Monsanto as represented by its wholly owned subsidiary Monsanto India Ltd and the majority-owned Monsanto Holdings Pvt Ltd, and PHI Seeds Ltd, the Indian arm of Pioneer Hi-Bred International, a DuPont business. The others were with top Indian biotech seed companies, Advanta India, JK Agri Genetics, DCM Shriram Consolidated, Krishidhan Seeds and a local outfit, Kanchan Jyoti Agro Industries. An eighth agreement with Bayer BioScience Pvt Ltd, Indian subsidiary of the German giant Bayer CropScience, although finalised, was not signed in the wake of the controversy over the earlier seven.

The agreements had resulted in a furore when these were brought to light by Down To Earth (‘Rajasthan opens farm gates’, November 1-15, 2010) because they allowed the private sector free access to the state’s research facilities along with a guaranteed market for their hybrid seeds and other technologies. It was the first such initiative by a state government and involved wide-ranging partnerships with the four state agriculture universities and with the agriculture and horticulture departments. Involving a total recast of agriculture, it raised questions about the impact of such tie-ups on the farming community.

Apprehensive farmers had demonstrated before the Vidhan Sabha in March, demanding that the MoUs be scrapped, and so had some NGOs who, however, diffused the issue by turning it into an anti-Monsanto protest.

A senior Rajasthan government official told Down To Earth: “We are scrapping the MoUs on the advice of the Indian Council of Agricultural Research (ICAR), which has said it is best we wait for the guidelines it is preparing for PPPs before implementing these agreements.” The official said he had sought the opinion of several agriculture experts, among them M S Swaminathan who is popularly referred to as the father of India’s Green Revolution, but had received no clear response on what it should do with the contested MoUs. With opposing pressures building up—from influential politicians, Sajha Manch, a collective of farmers’ organisations, on the one hand, and the biotech industry on the other—the state government approached ICAR in May for a way out.

The reply sent by ICAR to the Rajasthan director of agriculture after a critical review of the MoUs makes it clear that PPPs with foreign companies are out. State governments cannot sign any agreement relating to research and development with foreign companies without the approval of the Department of Agricultural Research and Education (DARE), it says. DARE is a department of the Union Ministry of Agriculture.

ICAR also cautions Rajasthan on tie-ups with private companies in agriculture research because there is as yet no established mechanism for such PPPs. The worry is that “they raise several issues, such as those of intellectual property rights, costs, sharing of benefits, biosafety, etc.” DARE/ICAR is in the process of establishing a proper mechanism.

For Rajasthan, the ICAR advisory has come as a relief. A top-level official admits tacitly that the MoUs have been a mistake. “The companies were only interested in selling their seed and not in research. Nothing much was offered from their side to implement the MoUs. So we didn’t see any point in pursuing these agreements.”