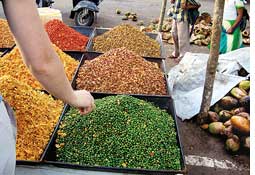 a survey conducted recently in Mysore in Karnataka revealed some of the common adulterants found in food products: metanil yellow and lead chromate, both inorganic dyes used in leather, paper and textile industries. These are known to cause anaemia, failure of reproductive organs, infertility, stomach disorders, cancer, paralysis and brain damage in human beings.

"The level of adulteration in food in Mysore has gone up by 20 per cent,'' said T V Nagraj, executive committee member, Mysore Grahakara Parishat, a consumer rights ngo that conducts such surveys. But the problem, he says, is: "The Mysore City Corporation has not prosecuted anyone for food adulteration in the past 28 years. The Department of Health and Family Services needs to depute a food analyst but the one who has been promoted from within the corporation now does not have authority to prosecute.''

"Most black pepper and groundnut kernel samples were fungus infested and most of the spices had their oil extracted. The extracted spice oil is exported and the remains, about 2-3 per cent, are sold in smaller shops,'' said Nagaraj. The survey also found that the pepper samples were polished using mineral oil, giving them an attractive black look. But they also cause diarrhoea, nausea and vomiting.

Half of cardamom samples had the oil removed and artificial colours added. Similarly, 83 per cent of clove samples did not have the oil. Other samples--turmeric, chilli powder, cumin seeds, ghee and butter--were also "highly adulterated".