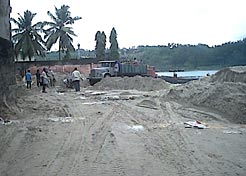 left high and dry due to rampant sand mining, the tribal people of the Car Nicobar region of Andaman and Nicobar Islands have asked the local administration to clamp down on the activity immediately. The extraction continues unabated in spite of a May 7, 2002, Supreme Court (sc) directive stipulating that commercial sand mining be reduced in the union territory (ut).

On August 17, 2003, the Tribal Council -- the apex body of local communities -- wrote to Lt Governor N N Jha seeking a complete ban on sand mining. "The activity threatens the very existence of the islands," points out council chairperson Aberdeen Blair. "Instead of being regulated in accordance with the sc order, mining is actually increasing," adds Blair. In 2003, about 20,000 million tonnes of sand has been lifted so far.

The apex court ruling came on a petition filed by the Port Blair-based Society for Andaman and Nicobar Ecology (sane) and Mumbai-based Bombay Natural History Society. Since then sand mining is being handled by the ut's forest department. It is quite evident that the local authorities have, intentionally or otherwise, not implemented the order in earnest.

Blair blames the centralised system. "The administration should seek the approval of the Tribal Council before taking up such activities. But the council is kept out of the process," he alleges. For its part, the local administration refused to comment on the charges.

According to environmentalist Pankaj Sekhsaria, destruction of the beaches has led to seawater entering settlement areas and causing extensive damage to crops. Subhasis Ray of non-governmental organisation Health Environment and Less Pollution notes that the mangroves which protected the land from erosion have been destroyed due to mining. The marine ecology of the region has also suffered. "Over the past decade, mining has almost wiped out turtle nesting sites on the beaches," laments Sekhsaria.