Ranbaxy expansion in a ferment 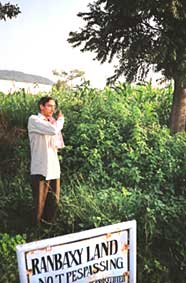 the Himachal Pradesh High Court recently ordered the expansion of Ranbaxy's fermentation plant in Ganguwala village in the Sirmaur district to be stopped.

The order came after residents of the village filed a petition. Villagers alleged that the company was violating environment norms as well as the land laws of the state. They also feared an increased waste production and depletion of groundwater, as the capacity of the proposed fermentation plant after expansion would increase 15 times, thus increasing its water requirement to 100,000 litres a day.

The order, passed by a division bench comprising Chief Justice Vinod Kumar Gupta and Justice Deepak Gupta further directed that the company could start work only after preparing a comprehensive environment impact assessment (eia) plan and conducting public hearing again. Earlier, local villagers had alleged that they were not provided with a copy of the eia held on June 28, 2004.

The high court, however, gave a green light to Ranbaxy's new formulation plant at Bata Mandi, subject to the condition that the pharmaceutical company includes a reverse osmosis plant in its design, where treated wastewater will undergo reverse osmosis before being dumped.

Although villagers have welcomed the judgement, they are apprehensive about the ground water level in the Bata Mandi area and its impact on their agricultural fields. The court also criticised the role of Himachal Pradesh State Pollution Control Board in clearing the projects.

Ranbaxy has promised to comply with all the court orders but has chosen not to speak on the issue further.