Range size has a clue for threatened species 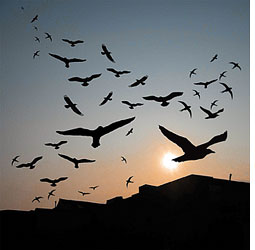 there is a new approach to find out if bird species are threatened. Usually, a bird is classified as endangered or critically endangered on the basis of its range size--the minimum space a species needs to survive. Range size in birds is among the several criteria used by the World Conservation Union (iucn) to determine the threat level.

Researchers from the Duke University have recently come up with a new model to determine the range size. According to the new model, the actual area available to a bird is much smaller than estimated. For example, the iucn estimated Brazil's grey winged cotinga's (Tijuca condita's) range to be 3,350 sq km but the new model estimates it at 155 sq km only. Researchers say the model may change the threat status attached to birds.

The Duke model uses a simple and repeatable protocol to evaluate the range size for forest birds. They have set a threshold range of 11,000 sq km for forest birds. Birds that are above the threshold are not considered threatened while those found below the range are considered threatened. The researchers calculated the suitable habitat left for the birds in the 'original range'. They used the current data on forests and the space the birds occupy in them because forests are rapidly degrading and thus affecting the forest birds' food sources.

Researchers, however, insist that their's is a better method to calculate range-size than the one iucn is using. Susanne Shultz of the University of Liverpool's Population and Evolutionary Biology Research Group says this model will help assign threat categories faster. Experts also point out that such a model will help provide better information for conservation and land use.

The study was published in the online edition of Conservation Biology.