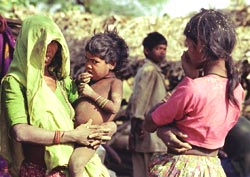 the Supreme Court (sc) has come down heavily on the Union and Rajasthan governments for showing slackness in the implementation of food-for-work schemes. The sc reprimand comes in the face of the recent hunger deaths in Baran district of the desert state. The apex court ordered that the chief secretaries of all states would be directly held responsible in case of further non-compliance of its orders. The directive came on October 29, 2002, during the hearing of the public interest petition filed by the People's Union for Civil Liberties (pucl).

However, the verdict has ruffled a few feathers. "It is like holding the superintendent of police accountable for all the murder cases in his area," says Mithi Lal Mehta, former chief secretary, Rajasthan. He feels that the office of the chief secretary has been unnecessarily singled out.

Experts working in the tribal areas of Rajasthan say that though such decisions may not prove very effective on the ground, they will spur the rusted bureaucracy into action. "Such orders will have some impact, particularly in Rajasthan, where the legal process has been supplemented with public action," says Jean Dreze, honourary professor at the Delhi School of Economics. He has conducted in-depth studies on the food scenario in tribal areas of Rajasthan.

The sc order follows the recent revelation by a team consisting of representatives from pucl and two other non-governmental organisations that members of the Sahariya tribe in Baran are dying of hunger. The report pointed out that the majority of deaths were caused by the failure of the government to implement food based employment schemes in the area. "Sahariyas are forced to fend for themselves. They survive on rotis (chapattis) made up of sama (a wild variety of grass)," the report said.

Following the report, a blame game started between the Union and state governments. While the initial official version of the state was that no death had taken place, it later said that diseases had claimed the lives of the community members. At the court hearing, the Union government officials denied any shortage of food in the country. They claimed that many states had not "lifted" their share of foodgrains from the godowns, adding that this was the case with Rajasthan too. The state government, on the other hand, said that the charge was "politically motivated". Rajasthan famine relief minister Gulab Singh Shaktawat accused the Union government of delaying assistance to combat the adverse drought conditions in the state. "Certain parties want to take advantage of this situation by indulging in misleading publicity," alleged the minister. He pointed out that the argument put forth by the Union government didn't carry much weight since wheat was available in the open market at rates lower than above poverty line (apl) prices.

But organisations working in the Baran district have a different story to tell. They say that foodgrains are not reaching the affected areas on time. According to the pucl report, even the stipulated 0.5 tonnes of grains are not reaching every gram panchayat. In some cases gram panchayats have not received their quota for more than 15 days, it adds.

But experts claim that the real issue has been forgotten as the centre and the state make claims and counter-claims. "The priority should be massive employment generation in drought-affected areas," avers Dreze. He adds that social security arrangements must also be made for those unable to work. To ensure compliance with its orders, the sc has given eight weeks to chief secretaries of all states. The court has also directed the secretaries to give wider publicity to its orders regarding the implementation of various poverty alleviation programmes. "The directions should be prominently displayed at gram panchayats, school buildings, fair price shops and also aired on All-India Radio and Doordarshan," the court ordered.