The map and its theories, prepared by William Smith in the nineteenth century, led to the development of geology 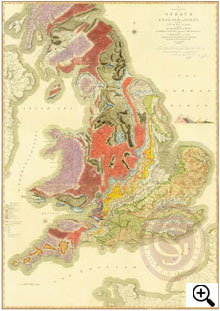 Archivists from The Geological Society of London have uncovered a rare first edition copy of the first ever geological map of a nation produced by William Smith. The geological map of England and Wales, which was previously considered as lost, is thought to be one of the first 10 copies produced by Smith. It has been fully restored and will be on display at The Geological Society which is celebrating the map’s 200th anniversary.

“These maps are extremely rare,” says John Henry, chair of the Geological Society’s History of Geology Group, in an official press release. “Each one is a treasure, and to have one of the very first produced is tremendously exciting.”

William Smith (1769-1839), known as “The Father of English Geology”, published the map in August 1815 as “A Delineation of the Strata of England and Wales, with part of Scotland; exhibiting the collieries and mines, the marshes and fen lands originally overflowed by the sea, and the varieties of soil according to the variations in the substrata, illustrated by the most descriptive names”.

The map was found “among completely unrelated material” by the Society’s archivists during an audit of the archives. Its estimated value is around $223,000.

Why is this map important?

Maps produced before Smith’s version identified rocks by their types. But Smith classified rocks according to their age and the manner in which they were deposited in layers, that is in their stratigraphical order.

“Smith’s importance to the history of our science cannot be overstated,” says Henry. “His map is a remarkable piece of work. It helped shape the economic and scientific development of Britain, at a time before geological surveys existed.”

William Smith worked as a surveyor and engineer. While tasked with surveying an estate, Smith noticed similar layers of rock or stratification as in another region. He continued noting the similarities in their layering during subterranean surveys of coal mines. During excavations for the Somerset Coal Canal in 1795, Smith noticed the same stratigraphy in spots that were even two miles apart. He realised that certain kinds of fossils were found in certain layers of soil and thus, the fossils found would enable him to classify these layers across the country.

He wrote in 1796, “Fossils have been long studied as great curiosities, collected with great pains, treasured with great care and at great expense, and shown and admired with as much pleasure as a child’s rattle or a hobby-horse is shown and admired by himself and his playfellows, because it is pretty; and this has been done by thousands who have never paid the least regard to that wonderful order and regularity with which Nature has disposed of these singular productions, and assigned to each class its peculiar stratum.”

The Geological Society says of 400 copies that were possibly produced, only 150 remain today.