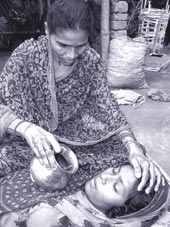 within a month of the onset of monsoon, large parts of India are under the weather. Twelve states have reported outbreaks of various diseases and close to 400 people have died. The Union ministry of health and family welfare's (mohfw) prescription for arresting this alarming trend is yet another centralised disease-monitoring programme, which will be implemented from July-end onwards. The need for such a scheme was felt because of the respective state governments' ineptitude to control the sudden surge in the incidences, say ministry officials.

To be sure, in West Bengal -- where 100 people have died in Murshidabad district alone as per figures provided by the Indian Medical Association -- the response of the authorities leaves a lot to be desired. Not only have they played down the crisis (the official toll stands at only 23), a controversy has erupted over the cause of the deaths (see box: Diagnosis debate). The toss-up is between a 'mysterious fever' and influenza. Meanwhile, the district magistrate of Murshidabad has ordered an inquiry to establish the exact number of deaths.

The situation is worse down south. Nearly 200 people have died due to recent outbreaks of dengue fever, leptospirosis and viral fever in Kerala. More than five lakh people in six districts of the state have been afflicted by the diseases over the past one and a half months. Medical experts attribute the resurgence of the contagions to the state's defective waste management system and its deficient primary healthcare facilities. And Kerala's health minister, P Sankaran, offers a lame excuse claiming that the "under-staffed" public healthcare sector is "doing its best".

Orissa, too, is in bad shape. Anthrax is almost endemic in the state. Ten people have died in the Bopariguda and Lamtaput blocks of Koraput district, and health department records show that a total of 83 cases have been reported from the area. The medical officer of the state disease surveillance cell, B K Patnaik, says: "Anthrax is not new to Koraput; it has been occurring in a sporadic manner in the district for years."

A Union health ministry official discloses that the objective of the new disease-monitoring scheme is to nip such recurring outbreaks in the bud. The scheme came up for discussion in a meeting called by Union minister of health and family welfare Sushma Swaraj on July 3. It was reportedly decided that the Rs 1,000 crore allocated under the 10th five-year plan for the programme would be spent on human resources, machinery, insecticides, etc.

With inputs from Vibha Varshney in New Delhi, Sujoy Dhar in Kolkata, Sridevi Jacob in Kochi & Satyasundar Barik in Bhubaneswar