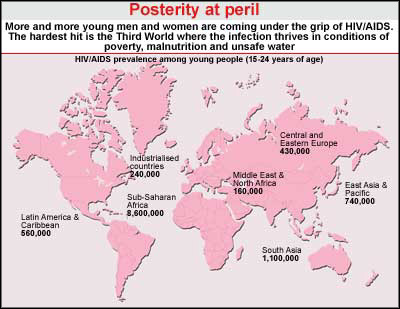 Today, around 36 million people are living with HIV/AIDS worldwide. Of these, 11.8 million are children and young people. Half of all new cases of HIV -- almost 6,000 daily -- occur in young people 15 to 24 years of age. What aggravates the problem is the widespread ignorance about the epidemic among the young men and women, many of whom do not know how to protect themselves from the spreading scourge. Worse still, in the last 15 years, the number of under 15 children with HIV/AIDS has increased ten times. In 2000, some 2.3 million children became AIDS orphans -- one in every 14 seconds. And it is obvious that the growing number of the children whose parents have died are less likely to access services and attend school than those who have not lost a parent. Thus the biggest casualty is their vulnerability.