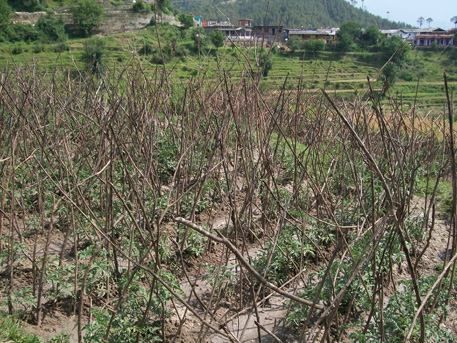 The residents of Rawain valley of Uttarkashi district in the hill state of Uttarakhand are, however, least aware of or bothered about such statistics like any other rural farmer in India. But they have been growing vegetables for the past one decade on their land which was earlier exclusively used for raising staple crops.

“Earlier, I used to grow a few plants of tomatoes in my kitchen garden. Now I grow pea and tomato on my small farm in the valley,” says Vinod Kumar of Arakot village in Purola tehsil of Uttarkashi district. “Those who have adequate land here in the village earn good money by producing and selling vegetables,” he adds.

The landholdings of Uttarakhand’s farmers are small and scattered. Majority of farming here takes place on rainfed land. In order to reduce the degree of risk and vagaries of climate and weather, hill farmers traditionally grow many crop species together. This practice is called “Baranaja” (growing 12 varieties of crops) system, which leads to a symbiotic relationship between different plants and contributes to increased productivity of crops. In the past, crops were raised for self consumption and not for sale.

“Growing commercial crops is not important in most hill districts of Uttarakhand as the proportion of land for such crops is less than 5 per cent. Nonetheless, agriculture remains the prime source of livelihood of about 80 per cent people of this state’s working population,” say Ghayur Alam and Deepti Verma of Centre for Sustainable Development, Dehradun, in their study on successful supply chain in Uttarakhand. Many constraints in supply and marketing of agriculture produce, which include poor accessibility to market, discourage hill farmers from growing cash crops. 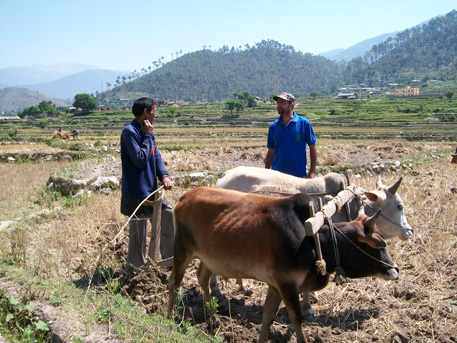 “In the beginning, switching over to vegetable cultivation from traditional crops raised doubts in our mind, especially about its takers. Therefore, a farmers' association was formed in order to remove all possible hurdles,” says Brij Mohan Rawat, a member of the Fruits and Vegetables Growers Association (FVGA) in Purola. “Mother Dairy was approached to purchase the vegetables, especially pea and tomato, through an agreement with growers and FVGA. Farmers bring vegetables to the local collection centre from where it is transported to New Delhi office of Mother Dairy,” says Rawat.

Once farmers agreed to grow vegetables, some Dehradun-based wholesalers also began to depute their agents to the villages. Some farmers sell their produce to these agents directly rather than to FVPA. Since water is required for cultivation of vegetables, especially tomato, the residents began to concentrate more on their irrigated land in the river valley. “We have migrated from uphill village to river valley as there is scarcity of water for irrigation. Fortunately, there is negligible migration from our village to the cities, as we have good farming system,” says Dharamveer Singh of Khaladi village. 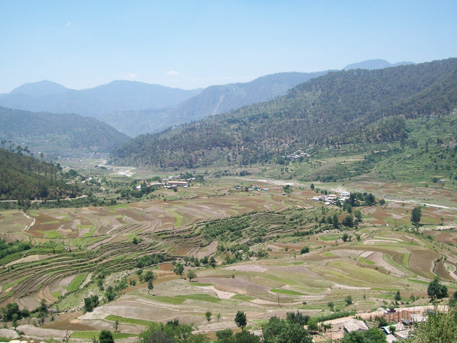 “The canal network is old and broken at number of places. What we require immediately is to renovate the network in our valley’s irrigated agricultural land. I have tabled a plan of Rs 25 lakh before the members of gram sabha for repairing all canals in our farms under the scheme of Mahatma Gandhi National Rural Employment Guarantee Scheme (MGNREGA) but it was deferred. My priority is renovation of canals first then creating storage facility,” says Rawat of FVGA.

Leaf litter from adjacent forests is also collected for making manure by spreading it as the overnight bed for cattle, which is then mixed with cow urine and dung. It is swept in the morning and is piled at a distance from the cowshed to let it decay for couple of months before it is used for increasing crop productivity. “Our village is surrounded by pine forests and pine needles litter is less fertile than oak-rhododendron leaf litter. Therefore, our dependency on chemical fertilizers is more,” says Ravindra Singh Rawat of Khaladi village. Agriculture land of Khaladi, Pujeli, Netri and Purola are surrounded by pine forests and receive some drained nutrients from these forests.

Use of high yielding varieties of crop, which rely mostly on use of fertilisers, is another cause of concern. It changes the indigenous cropping system and reduces crop diversity as well. Over time, continuous use of pesticides affect the crop productivity by altering the soil's properties.

Cultivation of vegetables is a profitable business which may be replicated in other areas, however, precautionary measures must be put in place to regulate use of pesticides and fertilisers.