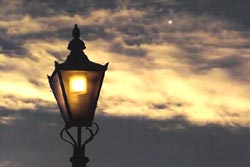 The night skies over central Europe just got a little darker. The Czech Republic has become the first country in the world to enact a national law against light pollution. A growing problem worldwide, light pollution is caused by bright nighttime lighting that disperses beyond the area intended. In cities, lights that project upward can obscure the stars and planets, a problem for astronomers. But stargazers aren't the only ones affected. Glare caused by poorly designed light fixtures also degrades visibility for drivers and pedestrians.

The Czech law requires modification of light fixtures. Jenik Hollan, an astronomer at the Nicolaus Copernicus observatory in Brno, has already noticed improvements on the streets if not in the skies. "Everything is more visible with reduced glare," he says. Still, full compliance with the law may take a while.