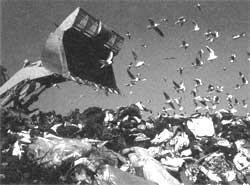 at the University of Zurich in Switzerland, Helmut Brandl and his colleagues of the Institute of Plant Biology have shown that the fungus, Aspergillus niger, can coax out most of the toxic metals from incinerator ash. This fungus usually produces citric acid for the foodstuff industry (New Scientist, Vol 152, No 2056).

Flyash from incinerators is usually buried in landfill sites because of contamination with metals such as lead, nickel and cadmium. The ash is first mixed with materials such as concrete to stop the metals from seeping into rivers and streams. But since the cost of landfills is rising, the search for alternatives is also intensifying.

It was found that Aspergillus niger took exactly a week to extract 80 to 100 per cent of the metals -- lead, cadmium, manganese, zinc and copper -- from the ash, that is, half the metal content was cleared in just a day. The fluid containing the dissolved contaminants too was drawn off and treated to extract the metals. The inert silicates and aluminium ores left behind in the ash could also be turned into building materials such as paving slabs.

But one disadvantage is the cost of adding glucose, a sugar that the fungus needs for survival. Since it is relatively expensive, an alternative cheaper material such as waste from the food industry is being thought off, says Brandl. He was also disappointed by the low amounts of nickel leached out by the fungus, less than about one-fifth the amount in ash. But he is confident that it will be possible to get almost all the metal out by treating the ash with a blend of different fungi or bacteria. Already, some success in treating the ash has been achieved using the Thiobacillus ferrodoxins bacteria.

Brandl hopes to have a small ash decontamination demonstration plant running within the next three years. But, he would need to think of an easier method to separate fungus from flyash. His work with the fungus is one of the 14 projects in Switzerland to develop alternative ways of treating flyash.

Tony Dean, director at the waste treatment firm Cleanaway in Ellesmere Port Cheshire, claimed that the approach was interesting and applicable. He said, "it is almost unbelievable that one could get half the metal content out in a day," but warns that it will remain impracti- cal in countries such as Britain, where disposal landfill is still reasonably cheap.