Reaching into the mind 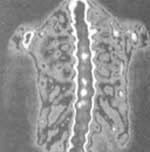 IF WILHELM Roentgen was to see a modern medical imaging laboratory today too years after the first x-ray images he would not recognise it. From ultrasound to magnetic resonance imaging machines, from PET (positron emission tomography) scanners to radionuclides, the range of devices used today for probing the human body is mind boggling. But one common feature which all these machines share is the extensive use of computers. The probes used by these different machines range from x-rays to gamma rays, but the efficacy of the techniques ties in the analysis of raw data done by fast computers using sophisticated algorithms.

Now a team of scientists at the Washington University Medical School, St Louis, us, is developing comput programs which will rearrange an 14 of the brain made by magnetic re nance imaging (MRI) to match a s dard atlas image of the brain or na versa. The boundaries and other 10 tures of the atlas can then be onto the original image, thus provi a modc by which doctors can radiation therapy or even measurt volume and shape of the br; structures like the hippocart (Science, Vol 269, September 8, 1995).

The mapping can be done by h but that takes an enormous amoul time and is unreliable. The existing grams for this mapping, though u! and fast, distort key features and de The new approach is to allow the image to 'flow' on a supercomputer with 16,000 separate processors. The image undergoes various transformations like stretching and shrinking, while all the time preserving the basic topology of the brain. It continues to evolve until it matches the standard image in the atlas.

While the technique is being developed for use in medical imaging, it could find extensive applications in other areas like astronomy or materia science. For instance, taking a raw image (from the telescope) of an object and mapping it onto a good reference image could prove to be very useful for astronomers.