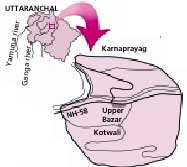 Karnaparayag in Uttaranchal has become landslide-prone, warns an expert. If mitigation measures are not initiated in time, says Aniruddha Uniyal of the Dehradun-based Disaster Management and Mitigation Centre (dmmc) in an article that appeared in the October 25, 2004 issue of Current Science journal, the township could go the Uttarkashi way. Karnaprayag is situated at the confluence of Alakananda and Pindar rivers on the Haridwar-Badrinath National Highway.

Among the localities Uniyal identified, five are particularly vulnerable and include Upper Bazar and Kotwali and Police Colony, prominent residential areas all.

"Cumulative effects of natural processes and anthropogenic activities may act as causative factors for these potential slide zones," he said. Some factors directly influencing the sliding process are heavy precipitation, excessive seepage of water blocked in choked-up drains, and seasonal streams narrowing because of unplanned construction (buildings, roads).

These were the very factors that caused, in September 2003, the Varunat Parvat to collapse and slide into Uttarkashi. This landslide was as severe as the 1998 Malpa landslide in Pithoragarh district (which killed 200 people including 60 Kailash-Mansarovar pilgrims) but no one died. For 10 days, debris flowed in, severely damaging property: 368 buildings were completely damanged. Varunat Parvat debris also destroyed more than a kilometre of the Uttarkashi-Gangotri National Highway (See: Debris Flow, Down To Earth, October 31, 2003).

"There is always an element of uncertainty," Uniyal told Down To Earth, indicating the need to ward off landslide dangers. Since the time the article had been filed, he said, the local administration had prodded the Border Roads Organisation (bro) into making a few retaining walls in some localities. But these weren't enough, he said.