A modular bridge kit made of railroad flatcar decks 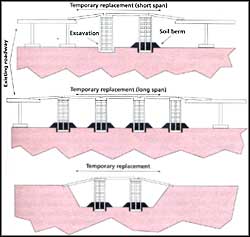 ONE of the most challenging tasks in the wake of devastating earthquakes, floods and other such natural calamities is the repair of roads and railway supply lines. In particular, mending bridges poses the greatest problem because conventional methods to construct bridges require a lot of time and expenditure. But now, it would be possible to restore supply lines by constructing them in a few days and at a fraction of the cost of the traditional methods using an innovative technique.

W H Wattenburg of University Foundation, California State University, and his collaborators have developed a modular multilane bridge kit which could revolutionise the whole industry. While most road bridges use steel and concrete, the modular bridge design uses only steel. That by itself would not be terribly significant but for the fact that the basic module is a railroad flatcar deck. The whole module uses only these with simple steel fasteners (Science, Vol 268, No 5208).

The basic design uses flatcars that are 3 m wide and 16 m long, weigh about 3 tonnes and are designed to carry up to 50 tonnes of load. Four such flat- cars are interlocked and placed on vertical piers. The vertical piers themselves consist of I flat car placed horizontally on top and supported by .2 half flatcars as vertical columns. At the foot of each pier is another flatcar which provides the foundation to the pier. The pier is further strengthened by 2 diagonal steel braces which are again made from the beams of the flatcars! The horizontal part of the bridge is tied up with vertical steel cables.

The design has been tested in the laboratory for safety considerations. Using the finite element method (in which the whole structure is broken up into small elements and the stiffness behaviour of each element is calculated mathematically), the designers have Temporary replacement (short span) For US President Bill Clinton inspecting a crater following the '94 California quake, the new bridge kit must be a dream come true determined that the bridge is seismically safe. The stress levels of the steel members was below the allowable yield stress(the stress at which the material is permanently deformed). The ability to withstand an aftershock is important because of the potential applications of the bridge in emergency situations.

A prototype of the bridge was constructed and tested in California in 1994. The prototype was constructed in 10 days and tested in the field. Encouraged by the results of the trial, California Department of Transportation (Caltrans) has now made a field- ready version of a 50 m bridge. This kit can be stored in a central place and quickly moved to the site when needed. Once there, the bridge can be assembled in less than a day!

A major advantage in this design is the cost. The bridge kit developed by Caltrans costs about us $260,000, which includes prototype testing, experimentation and transportation. On the other hand, a conventional bridge costs about twice as much and takes months to complete. In fact, Caltrans estimates that the bridge could be duplicated for about us $150,000, including the cost of a concrete roadway on top.

Apart from the cost and time considerations, the bridge is also environmentally sound. Because setting up of the bridge does not require extensive excavation work, it could be the design of choice over ecologically sensitive areas like creeks or wetlands. The ease with which the whole structure can be dismantled and reused at another place is a major advantage as there is no loss of materials. Though the basic material required for the bridge is rail-road flatcars, which are usually easily available, the designers have also tested the safety of a structure built out of standard steel i-beams which are almost universally available. Such a bridge also was found to be able to withstand earthquakes.

The design could prove to be immensely useful in many countries where extensive bridge design and construction capabilities do not exist. The skills required for fabricating the bridge, like cutting and welding steel beams, are widely available.

Given that most underdeveloped countries lack critical transportation facilities which can usually be developed only at enormous cost, this innovative, inexpensive and eco-friendly bridge could prove to be a boon for them.