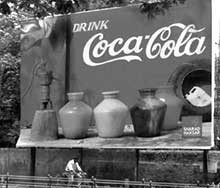 The poster shows a line of water containers and a hand pump with a Coca-Cola logo in the background. Coca-Cola spokesperson, Vikas Kotchhar said a legal notice had been sent to Haksar for infringement of trademark. The notice states that the photographer should remove the billboard immediately and issue an apology to the company or face further legal action and a possible fine of us$46,000.

Haksar, who runs an advertising agency, 1pointsize, said, "The hoardings are part of a personal campaign I have carried out in Chennai for the past three years, wherein I take a social issue each month and highlight it through pictures. It's my take on the severe water shortage across India. It's a fact and a grave irony that there is a shortage of drinking water while Coca-Cola is available everywhere".

Reacting to the legal threat, Haksar said, "The hoarding does not demean, or defame anybody. It is just a creative piece of work. In fact, senior Coke officials who have visited my office had seen the picture even before it was put on the hoarding. They didn't raise any objection. Now they have issued me a legal notice. I am indeed zapped". The photographer said the legal threat was an infringement of his freedom of expression.

Haksar however, hastened to add, "They (Coca Cola) are my clients, I have done work for them in the past. I hope the matter is settled amicably". He said the Coca-Cola poster was due to come down at the end of July but he would keep it up if the legal action continued.