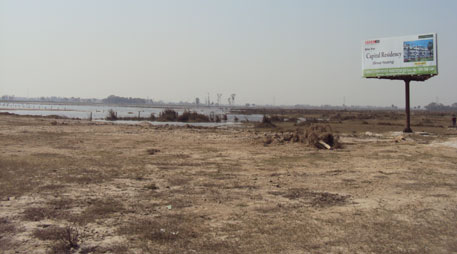 The Bil Akbarpur water body in Dadri near Delhi is home to many rare bird species and is in an ecologically sensitive zone. The 20 hectare wetland may soon give way to a township, if authorities do not intervene. A major portion of the wetland, in fact, has already been filled with earth for land reclamation that precedes construction.

A mega green township is proposed in the area by the Ansals. The developer bought farms and common land from the village panchayats nearby for the development of the township.

Environmentalists and concerned residents are opposing the project. The wetland has been home to more than 200 rare bird species, black bucks and deer. Ornithologists have spotted migratory birds which have flown from as far as Alaska to this wetland. Noted photographer and birdwatcher Anand Arya says he has even sighted the Bristled Grassbird (Chaetornis striatus), a species endemic to the Indian subcontinent, and a globally threatened bird according to International Union for Conservation of Nature (IUCN) Red List of Threatened Species, in the wetland.  Arya says the takeover of the wetland, which is part of village commons, is illegal because it amounts to alienation of public land. 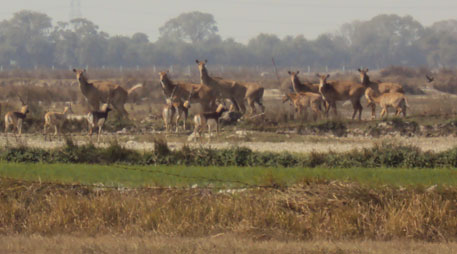 The development project is also a violation of the Wetland (Conservation and Management) Rules of 2010 notified over a year ago by the Union Ministry of Environment and Forests (MoEF). The rules completely ban conversion of wetland for commercial uses and mandate protection of the drainage and catchment areas of the water bodies.

The builders got environmental clearance for the township without showing the presence of the wetland says Vikrant Kumar Togad, an environmentalist and an area resident who has been fighting for the protection of the wetland along with Arya. The 20 hectare wetland area has been reduced to a mere 6 hectare due to earth filling by the developers, they say. This encroachment has stopped the storm water from the surrounding areas from draining into the lake, affecting the water level and the natural habitat of the migratory birds. The biodiversity of the lake would be greatly affected, says Ashok Kumar, vice chairman of Wildlife Trust of India.

After the hue and cry raised by environmentalists, MoEF sent a team to inspect the wetland last month. The team found certain construction activities around the wetland and has issued a showcause notice to the state government under the Environment Protection Act. The developer was asked to stop all construction and related activity with immediate effect. The district magistrate will send a team of experts to the site for survey of the area, informs Togad. 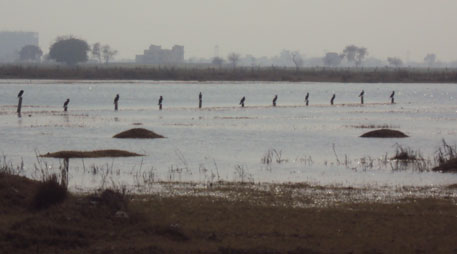 S K Kaul, director of wetlands with MoEF, says the state government is responsible for notifying the wetlands, water being a state subject.