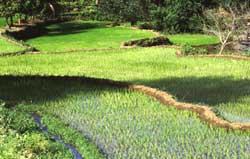 continuous submerged paddy cultivation doesn't harm soil as believed. Rather, it improves fertility as compared to other agricultural systems, claims a study by researchers from Hyderabad-based International Crop Research Institute for Semi Arid Tropics (icrisat) and the National Bureau of Soil Survey and Land Use Pattern, Nagpur.

The study found that land used for growing two rice crops every year has higher organic carbon and nitrogen content than that under rice in rotation with an upland crop such as pulses, or under other arable systems. More importantly, it helped prevent degradation of calcareous soils (found in 229 million hectares) into sodic (high sodium content) soils. The study was conducted at eight sites in semi-arid tropic (sat) regions of Karnataka, Andhra Pradesh, Tamil Nadu, Rajasthan and Maharashtra.

"The findings are against the conventional research that promotes rotating paddy cultivation with other crops and dissuades double paddy farming," says John David of the Allahabad Agricultural Institute. The study was published in the December 25 issue of Current Science (Vol 89, No 12).

Maintaining soil fertility is a major challenge in sat regions, where the soil is generally poor and high temperature results in rapid decomposition and loss of organic matter. Besides, farmers in these regions cannot afford expensive mineral fertilisers. Therefore, it is imperative to follow agronomic practices that are good for the soil.

But some experts question the significance of the research. "Double cropping of paddy may improve the carbon and nitrogen content. But have they calculated the amount of water required for growing two crops of paddy?" asks G Narayanasamy of Delhi-based Indian Agricultural Research Institute. He believes growing the same crop continuously plays havoc with the soil's physical, chemical and biological properties.

However, K L Sahrawat of icrisat, the lead author of the study, says, "We are not preaching what farmers should grow, but simply saying that paddy has comparative advantage in floodplains."

The study shows that submerged soil accumulates more carbon and nitrogen mainly due to the action of anaerobic bacteria. Also, organic matter decomposes faster in the presence of oxygen, while anaerobic conditions delay the process through formation of recalcitrant complexes.

Besides, carbon in submerged soil reacts with fluids secreted by paddy roots, which are acidic in nature, to form carbonic acid. The acid converts the calcium in the soil into calcium bicarbonate, which readily dissolves in water. This reduces the ability of water to dissolve sodium compounds present in the soil, preventing it from turning sodic and so less productive.

Preserving soil fertility is crucial to achieving a sustained increase in productivity. Once the soil loses fertility, no amount of nutrients (fertiliser or manure) can completely restore it, says Sahrawat, adding, "It is important to appreciate that for centuries, paddy-paddy cropping has been an example of sustainable fertility maintenance."