If you want to live longer, you may have to go hungry 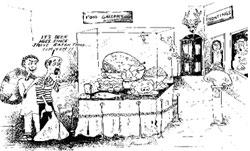 some animals put on low-calorie diets have been found to increase their life span. If the method is confirmed in other animals, too, then it may become a reliable means of extending a mammal's life span. Experiments on monkeys whose body formations are similar to humans have shown encouraging results.

George Roth and his colleagues at the National Institute of Ageing, Baltimore, usa , had found that diets containing 30-50 per cent fewer calories help rats at childhood or adolescence ward off ailments such as diabetes, hypertension, cataracts and cancer that are associated with ageing. But to ascertain whether the method would be helpful to humans or not, they conducted further experiments in monkeys.

The researchers changed a group of rhesus monkeys' diets with a diet that had 30 per cent fewer calories than animals of a control group which were allowed to eat freely. The rhesus monkeys were found to be healthy and aged more slowly than the other animals (American Journal of Physiology , Vol 42, No 4).

Animals in the low-calorie group developed several features associated with a reduced risk of heart disease and stroke. They had high blood levels of "good cholesterol", lower blood pressure, lower levels of triglycerides and less fat around the midriff. The team found high levels of a hormone called dehydroepiandrosterone (dhea). The levels of dhea normally decrease with ageing, and are considered a marker of ageing.

The researchers say that their aim is not to translate the findings to humans as it would be difficult to keep humans on a 30 per cent less diet for long. The diet reduced to this level means that most people will have to remain hungry. In fact, they are trying to unravel the mechanism by which the low-calorie diet could help slow the ageing process. If the chemicals that induce positive changes in terms of ageing are identified, some drugs could even be designed to do the job for humans, they say.

Another group of scientists led by Richard Weindruch of the Department of Nutrition Sciences at the University of Wisconsin, Madison, usa , is also trying to find means to slow down the ageing process. To realise their objective, they are using anti-oxidant agents/drugs. The researchers say that people grow old because of sustained release of some chemicals called free radicals. These are generated during the normal process of energy generation in the human body. The chemicals cause cellular damage.

Anti-oxidants can protect against these reactive oxygen molecules. According to the researchers, calorie restriction results in less metabolism and less generation of these harmful chemicals and hence slowing down the age-related damage.

Weindruch and his colleagues investigated whether calorie restriction could slow the decline in the quality and quantity of muscle cells. Some of the most important physiological effects include gradual loss of muscles, decline in hormones and thinning of bones. These often could be dangerous for old people. For instance, about 300,000 people over age 65 in the us suffer from hip fractures. Many such cases could be prevented by exercises for maintaining muscle strength and agility. The researchers have shown that if rats are put on a low-calorie diet even as late as 17 months, they tend to increase their muscle strength. Rats normally have a life span of three years (faseb Journal , Vol 11, No 7).

The researchers analysed various muscles of rats aged between 30 and 32 months. Rats on extremely reduced diets were found to have more fibres in their muscles and fewer abnormal changes in those fibres than those on moderately reduced diets. These rats seemed to have accumulated lesser genetic and biochemical errors in their mitochondria. Mitochondria are the tiny powerhouses of cells that convert oxygen into energy. During the process, they generates free radicals that can inflict damage on nearby genes and cell structures.

Less efficient and weak mitochondria are supposed to generate more free radicals during the ageing process. When these powerhouses weaken, they increase cell death and thus accelerate ageing. Weindruch proposes that people from families prone to cancer or degenerative diseases associated with ageing could be motivated to stick to a low-calorie diet. Also, the use of safe appetite suppressants could help them further reduce the chances of going overboard with food.