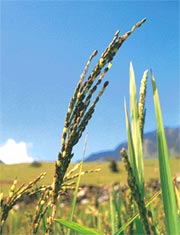 two groups of researchers, working separately, have recently published draft dna sequences of the two most important varieties of rice -- the staple food of billions. These sequences, published in the journal Science, are the first detailed genetic blueprint of a food crop. The fact that the papers are incomplete and full of errors notwithstanding, experts say such information could help food production keep pace with the growing population and declining arable land.

The first group, comprising researchers from 11 Chinese institutions, unveiled the genomic sequence of the rice subspecies indica , which is consumed predominantly in China and India. The second group, comprising researchers from the Swiss agrobiotechnology giant Syngenta, disclosed the genetic sequence of the subspecies japonica , which is popular in Japan and other temperate climate countries.
Both groups claim they have sequenced more than 90 per cent of the subspecies' total dna. Syngenta estimates that japonica has 420 million dna letters, whereas the Chinese group puts the figure at 466 million dna letters for the indica genome. Both groups used the 'whole shotgun' sequencing technique to break the genome into approximately 1,00,000 manageable pieces. These sequenced shards were then reassembled by computers. Syngenta's research indicates that rice has about 40,000 genes. The Chinese group claims the number is closer to 50,000. This means that rice has 10-20,000 more genes than humans.

Both researches state that 85 per cent of the rice genes are also found in Arabidopsis thaliana -- the first plant to have its genome sequenced. In contrast, only about half of the A thaliana genes seem to be the same as the rice genes. "The other half of the genome has chemical peculiarities unrecognisable in any other organism," says Gane Wong, a member of the Chinese group.

Until now, only the Chinese group has put its research in public domain through GenBank, an international public database. Syngenta has, meanwhile, entered into an agreement with Science to allow limited access to its raw data for non-commercial purposes. However, the company promises to work, in the future, with publicly-funded groups for producing complete drafts of the genome. Experts feel that such a promise is just a charade. "Syngenta knows that its sequence will be useless after the International Rice Genome Sequencing Project (irgsp) publishes its sequence. Hence it is playing safe," says Devinder Sharma, a New Delhi-based trade and agriculture analyst.

irgsp is a consortium effort by 10 countries, including India, to precisely map and sequence the japonica variety nipponbare -- the same one Syngenta has sequenced. irgsp is expected to come out with its sequence by end-2002. This draft will have all sequences, read with 99.99 per cent accuracy, genetically aligned as well as correctly oriented -- unlike the published drafts.

India joined the irgsp in 2000, and is sequencing a part of chromosome 11 of nipponbare . The initiative is a joint effort by University of Delhi South Campus' department of plant molecular biology, and New Delhi-based Indian Agricultural Research Institute's national research centre on plant biotechnology (nrcpb).
With the recently-published rice sequences, there were fears that the irgsp research might lose its funds. However, these fears were put to rest with researchers asserting that the incomplete drafts pose no threat to irgsp. "The recently published papers are only part of the story," says plant biologist Michael Bevan of the John Innes Institute, Norwich, uk. Manju Sharma, secretary, Union government's department of biotechnology, says, "The recent researches have no direct implications per se, unless the drafts help in developing improved rice varieties."

But this might be a distant dream. The published sequences provide insufficient information on which to base crop improvements. Herein lies the importance of the consortium effort. "Unlike the published drafts, the irgsp sequencing will be based on the physical and genetic maps. The precise locations and ordering of genetic sequences will be known," says Trilochan Mohapatra, principal co-investigator of nrcpb.

The irsgp sequence is sure to have major implications for agricultural research. The complete sequence of the rice genome could provide basic knowledge of the genomes of all species of 'cereal grasses', such as wheat or barley. "For example the wheat genome size is 40 times larger than that of rice, but the order of genes remains more or less the same," says Akhilesh Kumar Tyagi, coordinator of the Indian Initiative on Rice Genome Sequencing (iirgs), a project that is part of irgsp .

It is also possible that knowledge of the function of a specific gene could help researchers use genomic technologies to develop strains with characteristics, such as stress/disease-resistant, vitamin-added or high yielding varieties.

But such benefits also carry the threat of 'economic hijack' by the major players in the genomics business. "It will soon lead to a rat-race for patents," says Devinder Sharma. Already, close to 500 genes and cell lines for rice have been patented. Of these, 50 per cent are in hands of just 12 companies, including Syngenta and Monsanto, he says. These drawbacks notwithstanding, decoding the rice genome is likely to benefit humankind. It might just result in a 'green gene' revolution!