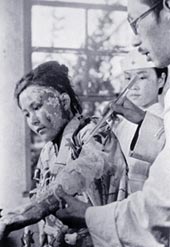 previous estimates of the neutron rays that Hiroshima atomic bomb survivors were exposed to are accurate. This was revealed during a study conducted by a team of scientists from the us and Germany. The research will help end a long-standing controversy on whether the existing standards to estimate risk for radiation-induced cancer should be changed for not. Data from Hiroshima and Nagasaki serves as the world's primary basis to estimate radiation-induced cancer risk. To date, some researchers believe that the levels of neutron rays that Hiroshima survivors were exposed to are much higher than calculated.

The latest study confirms calculations made immediately after the explosion of the atomic bombs in the Japanese cities of Hiroshima and Nagasaki in August 1945. The Hiroshima blast sent out two forms of radiation: gamma rays and flying atomic splinters called fast neutrons. The fast neutrons don't travel as far as gamma rays, but being heavy, they cause 10 times more damage to the body's cells. Doses of gamma rays are easy to gauge, but the physics of fast neutrons is a different matter. Atomic scientists could estimate the numbers produced by the blast and how fast they travelled by looking at short-lived radioactive phosphorus particles collected by researchers in the weeks following the blast.

To reassess the levels, the us and German researchers took samples of copper from surviving buildings located in different parts of Hiroshima. The team counted minute quantities of a rare isotope of nickel called 63 n i, which is produced when fast neutrons hit copper. The number of atoms of 63 n i in each sample provided the first direct record of the fast neutron doses that were received by people living 700-1,500 metres away from the centre of the blast. "These records are much more than just historical facts," says Gunther Korschinek, one of the researchers, who works for the Technical University of Munich, Germany.