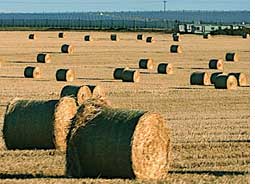 Scientists propose burying it below oceans

WORLD carbon dioxide levels are rising. The future is expected to be exceptionally warm. Many technologies are being proposed to tackle it. Efficiently reducing global warming requires carbon capture in large amounts. Furthermore, the captured carbon has to stay that way for thousands of years.

Methods for carbon capture should be ecologically safe, cost effective and worth repeating. Plants are good carbon sinks but when they die they release the carbon back into the atmosphere. Burying huge amounts of crop residue in the bottom of deep oceans is a good way to ensure the carbon stays captured, theorized a team of scientists from the US. This is akin to recycling the carbon back to deep ocean sediments which gave rise to fossil fuels eons ago, said the team. It is also estimated to remove 15 per cent of carbon dioxide coming from global fuel emissions.

The group suggested collection of crop residues which could be baled, transported to ocean sites, ballasted with stones and sunk. The technology takes advantage of the oxygen-deficient deep ocean waters to ensure the residues do not degrade, said the paper published in the February 15 edition of Environmental Science and Technology.

The paper explained how the other methods are not that efficient. Soil sequestration ensures that soils store up to 2 petagram (Pg) of carbon per year. A petagram is equal to a trillion kilogrammes. Once crops are harvested, the stalks and other unused parts of the plants are ploughed back into the field. Within 20 years less than 10 per cent of the carbon stays in the soil due to decay and degradation. Forests capture 0.1-3 Pg of carbon annually. But the ability decreases with maturity. Then there are forest fires and deforestation which release much of the captured carbon back into the atmosphere.

Ocean fertilization is still under trial. As part of the Indo-German lohafex experiment, iron dust is being sprayed across the South Atlantic ocean to create an algal bloom. This can remove 1-2 Pg of carbon annually. But 60-80 per cent of it is released back after algal deaths.

Sinking crop residue will be relatively cheap as the cost of raising the crops will be met by sale of the produce, said the team. Complete removal of crop residues should, however, be avoided as it will ruin the soil carbon level. Tonnes of crop residue may impact the ocean floor. For this, further assessment is required, concluded the paper.