Regulator under a cloud 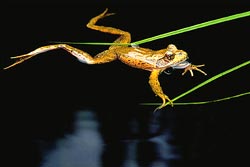 The organisation Californians for Alternatives to Toxics (cats) has sued the state's department of pesticide regulation (dpr) for not following the California Environmental Quality Act. The petitioner alleges that dpr has not reviewed the impacts of pesticides widely used in the Sierra Nevada amphibian habitats. This, it contends, has led to a decline in the population of the California red-legged frog and other amphibians listed under the Federal Endangered Species Act.

According to the California Environmental Quality Act (ceqa), the dpr is to re-evaluate pesticide registrations every year if evidence is found of environmental impacts. The cats petition claims dpr did not do so in the case of pesticides that have been implicated in the fall in frog numbers. Patty Clary, executive director of cats, said: "The dpr has known since 1993 that drift of insecticides applied to agricultural crops in the Central Valley has contaminated pristine areas of the Sierra Nevada, yet it has never investigated the extent of this pollution."

Around 72 million kilogrammes of pesticides are used in the Central Valley annually, and some are carried by winds to the areas of Sierra Nevada. Rainwater brings these pesticides back and they are then absorbed by the frogs' skin.