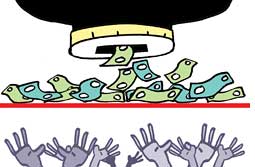 relief funds from the central government to help victims of cyclone Aila in West Bengal have hardly reached the needy. Political one-upmanship between the ruling cpi(m) in the state and Mamata Banerjee's Trinamul Congress, a coalition ally of the Congress party at the Centre, has stalled distribution of relief material.

"There was no dearth of relief materials but the problem was distribution," said an official. In previous years, the relief material was given directly to the panchayat pradhans for further distribution. But Trinamul is in power in many panchayats now and so the cpi(m) is seeking more accountability from them through the block level officials. For instance, in the South 24 Parganas district where Trinamul has a strong presence, the panchayats were accused of making exaggerated demands. A source in the district magistrate's office said the applications reporting house damage from many Sunderbans islands were exaggerated and the local administration has been asked to assess the scale of damage before funds are disbursed.

Sabuj Mondal, a resident of Gosaba block in Sunderbans said relief is often not distributed because of disagreements between political parties. The centre has sanctioned Rs 578 crore for cyclone relief in addition to Rs 1,000 crore for rebuilding river embankments. Trinamul leader Mamata Banerjee has been insisting that the Centre should monitor fund utilization saying it will be siphoned into party coffers by cpi(m).


State irrigation minister Subhash Naskar has, meanwhile, announced that land will be purchased from people to construct concrete embankments in the Sunderbans. But such embankments will cost a lot and won't be able to withstand river currents cutting the embankments from below and weakening them said Sunderbans expert Tushar Kanjilal. Tapobrata Sanyal, former chief engineer with the Kolkata Port Trust, said concrete embankments would not work because the river keeps shifting course.