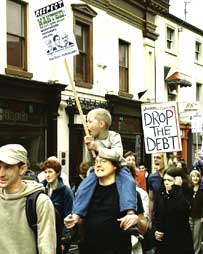 On June 11, 2005 finance ministers of g 8 nations (excluding Russia) promised loftily to cancel 100 per cent debts, amounting to us $40 billion, owed by the world's 18 poorest countries to the World Bank (wb), the International Monetary Fund (imf) and the African Development Bank. The countries will save us $1.5 billion a year in repayments of debts, some of which are due for maturity only after as long as 40 years. Nine other countries will qualify for the benefit within 18 months, increasing the total relief amount to us $55 billion. But economists suspect there might be a catch in the philanthropic act: it is not known how much of the relief is new money and how much a mere re-juggling of aid programmes. The uk, for one, has admitted that its share has already been promised as part of the aid programme unveiled in 2004.

The relief also comes with several riders: to qualify, nations must "tackle corruption, boost private-sector development and eliminate impediments to private investment, both domestic and foreign". These conditions make the deal risky for the poor nations. "They intrude into every aspect of sovereign government. Eliminating impediments to private investment means commercialisation, privatisation and liberalisation of trade and capital flows. And this means new opportunities for western money," explains George Monbiot, an international relations expert. The g 8 finance ministers' statement makes it clear that wb and imf will monitor the indebted countries' progress and decide whether they are fit for the favour. But wb and imf, Monbiot points out, are the agencies that would lose the most from the debt relief, and, hence, will have a vested interest in ensuring that it materialises as slowly as possible.