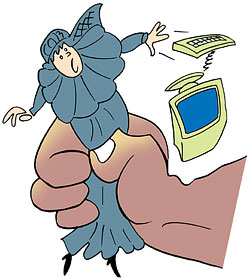 Police in Tehran have raided more than 400 Internet cafes and other shops as part of a campaign against what they call inappropriate and un-Islamic conduct. Iranian state media quote the police as saying that in the past few days, they have closed down 25 Internet cafes and given warnings to 170 cafe owners for "using immoral computer games and storing obscene photos", and for the presence of women without "proper hijab" on the premises.

The owner of one of the Tehran Internet cafes that was inspected and temporarily closed down by police, told Radio Free Europe that police started questioning him when they found some family photos with a female member of the family among them on a computer.

Internet cafes have become increasingly popular in Iranian cities in recent years. According to official state figures, 60 per cent of the country's population has access to the Internet.However, independent sources say that figure is exaggerated, given that many Iranians villages do not even have electricity. International estimates say that some 20 per cent of Iranians have access to the Internet.