Relying on intrigue to survive

Some insects come up with amazing answers to the question of survival. 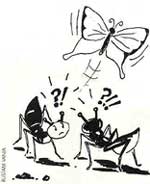 THIS IS probably one of nature's most intriguing survival games, involving two innocent players and a cunning third who eventually outwited.

Caterpillars of the blue butterfly, Maculinea rebeli, masquerade as larvae of the red ant, Myrmica schencki, so that they can obtain free lodging and boarding at the ants' expense. The ants, who indulgently look after their "wards" in their nests, cannot but "lament and curse the ways of the world" when they watch the caterpillars develop into butterflies, and not ants.

However, sometimes, the free stay turns into a nightmare for the caterpillars, when they fall prey to a parasitic wasp, Ichneumon eumerus, that specialises in laying its eggs in M rebeli blue caterpillars, which are then slowly eaten inside out by the developing wasp larvae (BBC Wildlife, Vol 11, No 4).

Ethologists Jeremy Thomas and Graham Elmes of the Institute of Terrestrial Ecology, UK, found the female wasps invariably delay their attack until their victims have been taken inside ant nests where they will be well looked after.This behaviour seems suicidal, for once inside the nest, the worker ants are capable of tearing the wasp to pieces.

But the wasps are not stupid. The female has a way of detecting the caterpillars from outside the nest. This is remarkable because the ants themselves cannot distinguish between the caterpillars and their own larvae, even at close range.

The new wasp that emerges 10 months later -- having feasted on the caterpillar -- produces a scent that provokes the ants into fighting each other and into attacking the newly empty pupal cases. This diverts the attention of most ants and the wasp makes good its escape.