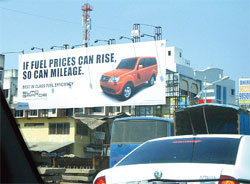 Pre-budget discussions on misuse of subsidised diesel in cars has hit a crescendo. Public angst has already brought this to a boil. Political ire is also sharper this year, with Union environment minister Jairam Ramesh condemning the use of subsidised diesel in luxury SUVs as “criminal”. Will the Union Budget 2011-12 make diesel cars pay the right cost of the fuel as well as the pollution?

Petroleum pricing and tax policy have so far failed to offer an effective solution to halt misuse of under-taxed diesel by rich car owners. This gross misuse has made diesel cars the second biggest beneficiaries of the official tax policy after trucks. They use up 15 per cent of diesel in the country, whereas buses and agriculture use 12 per cent each, industry 10 per cent, railways 6 per cent and power generation 8 per cent. Diesel cars are already 36 per cent of the new car sales, and will be 50 per cent soon. The growth is fuelled by the growing chasm between petrol and diesel prices.

Since 2008, petrol price in Delhi has shot up by Rs 12.75 a litre, whereas diesel price has increased by Rs 4.89. The price gap has widened from 28 per cent then to 35 per cent now. The under-recovery, the revenue that oil companies lose on diesel, stands at Rs 7 per litre. The government also incurs huge revenue losses as it earns much less from the excise on diesel used by cars as opposed to that on petrol. This loss is set to compound with an increase in the sale of diesel cars and SUVs. Diesel car owners recover their premium within four years, given the lower diesel prices. This will encourage a greater penetration of diesel in smaller car segments and guzzling of more fuel.

This budget will have to put a fiscal brake on the increased use of diesel in cars as well as prevent the shift towards bigger cars. An estimate by the International Council on Clean Transportation shows that increase in average weight of the Indian car fleet and increased “dieselisation” of cars can lead to a cumulative loss of 6.5 mtoe (million tonnes of oil equivalent) of energy between 2010 and 2020. This equals the fuel used by all four-wheeled passenger vehicles in the country in 2006. This further defeats the objective of improving India’s energy security.

Other countries are already taking active fiscal measures to discourage conventional diesel. In Brazil, for instance, diesel cars are actively discouraged because of the policy to keep taxes lower for diesel. In Denmark, diesel cars are taxed higher to offset the lower price of diesel. In China, taxes do not differentiate between petrol and diesel.

The government should not buy auto industry’s claim that diesel cars offer greater fuel efficiency and lesser carbon emissions. Diesel has higher carbon content than petrol. As more diesel gets burnt, more CO2 and black carbon will be released into the atmosphere. Black carbon can trap several times more heat and cause atmospheric warming. Further delay in reforming the taxes on fuels can have serious economic and environmental consequences.