A new, non-toxic variety of kesari dal is being field-tested in different parts of the country by IARI scientists. 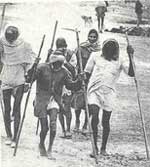 Though kesari dal (Lathyrus sativus) is a deadly food that can paralyse and kill thousands, it has been rendered safe by a research team from Indian Agricultural Research Institute (IARI), New Delhi. Team members used tissue culture techniques to develop a new, low-toxin dal, which is on trials in a three-state area with results expected by June.

Kesari dal is grown mainly in arid regions by poor and marginal farmers. Its cultivation is banned in Maharashtra, Uttar Pradesh and Assam because it can cause lathyrism, a form of lower-limb paralysis. This is caused by the presence of neurotoxins that can induce spasticity in the leg muscles, convulsions and, sometimes, even death.

S L Mehta, who heads IARI's biochemistry division, and his team initially used toxic leaf tissues, of a variety called P24, for culturing. Leaf discs were kept in a multi-hormone medium and after the cultured tissue developed roots, the plantlets were transferred to the soil.

Initially, 300 plants were developed, then, each year, the least toxic plants were bred further. The Mehta team produced a number of high-yielding varieties with toxin content as low as from 0.02 per cent to 0.05 per cent, compared to the toxicity of the common variety, which varies from 0.4 per cent to 0.8 per cent. Warns Mehta, "If the neurotoxins are completely removed, the plants will become more susceptible to disease and pests."

Seeds obtained from the new varieties are being field-tested by Directorate of Pulse and Research personnel in Kanpur, Raipur and Dholi, Bihar. "It is essential to assess the crop in different regions," says IARI professor R P Johari, "because the neurotoxin content of kesari dal varies with agroclimatic conditions."

IARI scientists are also using genetic engineering to deal with kesari dal toxins. They have identified and isolated the toxin-degrading gene in microorganisms from sewage, which use the toxins as their sole source of carbon and nitrogen. The gene, obtained from a Pseudomonas bacteria strain, has been incorporated into Escherichia coli bacteria, which was found to be as efficient in utilising the toxin. Scientists hope to incorporate the gene into Lathyrus sativus plants.

Though optimistic about the potential of genetically engineering kesari dal plants, Mehta says it will take time because developing a transgenic plant is quite unlike tissue culture, in which results can be achieved relatively quickly.