From common medicine to prevent bleeding during cardiac surgery 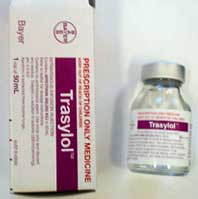 Scientists have found that a drug commonly used to prevent excessive bleeding during cardiac surgery may double the chances of kidney failure.

The patients injected with aprotinin, marketed as Trasylol by German pharma giant Bayer, were twice as likely to develop kidney problems and suffer from heart disorders as controls who received other drugs, scientists from the California-based non-profit organisation Ischemia Research and Education Foundation said. Trasylol inhibits enzymes involved in the clot-dissolving process, thereby hastening clotting. The researchers examined the effect of Trasylol in 4,374 cardiac surgery patients, who were given either the drug or a placebo.

The scientists also found the risk of heart attack or heart failure was 55 per cent greater amongst Trasylol users. Following the study that appeared in the New England Journal of Medicine (Vol 354, No 4, January 26, 2006), the US Food and Drug Administration issued a public health advisory calling for minimising the use of the drug.

Significantly, another study published in the online version of Transfusion on January 20 reported that Trasylol administration may increase the risk of renal toxicity.