Aquaculture, not pressure from gas deposits, as claimed by residents is responsible for the recent spurt of groundwater in Olpad town of Surat district in Gujarat. A research carried out by a team of experts at the Institute of Seismological Research (ISR) found that over 200 artificial ponds in Olpad are filled with sea-water. This sea-water in the ponds has resulted in infiltration of salty water into the ground causing gradient reversal and recharge of groundwater table.

Since the first week of June groundwater has been gushing out with high pressure from several bore wells while wells have been overflowing. In many houses, water burst through cracks in the floor and the sweet drinking water turned saline. This led to a panic situation. 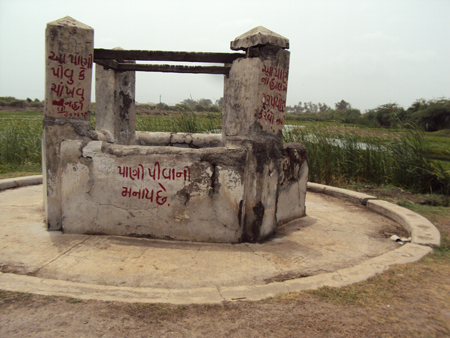 “It started around June 10. Water started oozing out from the floor of our house,” says Urmila Ben from Mali Falia area of Olpad. Officials visited our house and asked us not to use this water and made temporary arrangements for us. They asked us to shift to a flat nearby whose rent will be paid by them, she adds. Similar incident was observed in Ishanpur, two km away, from Olpad. “We have not seen anything like this before. It is strange,” says 60-year-old Zubina, a resident of the area.

People blame gas wells in the region for this strange incident. Oil and National Gas Corporation (ONGC) and Niko Resources Limited have gas wells in the area. ONGC has 18 operational gas wells of which two lie in the affected area, rest are 1-10 km away. Niko has 12 operational wells 2.5-12 km away from the affected area. “ONGC restarted work on its abandoned well, Olpad-4, and the incident happened,” says Mujammil Malik, a resident of the area. The company has stopped work now. “Production from this well was stopped in 2009 because pressure of the well reduced. It was found recently that the pressure was now adequate and production could be started,” says an ONGC employee on condition of anonymity.

“The upper layer of the land has black cotton soil and beneath it is sand. Natural gas is available just 60 metres below the surface. Water table is also high just 2-3 metres below the sand surface,” says Bhaskar V Buran, geologist with Gujarat Water Resource Development Corporation. Loose sand layer, unlike stone layer, cannot sustain the pressure of gas extraction. It thus creates pressure on the water table and water oozes out, he adds. But he notes that it is difficult to ascertain the exact reason. “We have no sign of any geological disturbance in this area. We can also not blame any company until something comes out clearly. Due to gas pressure beneath the ground, water may be coming out with force,” he adds. 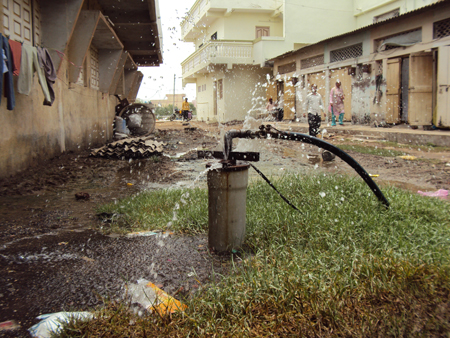 Meanwhile, ONGC has started drilling near the water gushing spots to reduce the underground pressure. “As the pressure will relax water will stop gushing out. ONGC is making an attempt to release the gas from sealed well,” says H K Vyas, deputy collector, Olpad.

Jayesh Patel, a farmer in the area says, “A few years back, there was a case of subsidence of land in this region. We are are afraid something similar may happen to this area. We have requested ONGC several times to tell us what is happening.”

The aggrieved residents on June 22 have filed a non-cognizable offence in Olpad police station against ONGC authorities for not giving them correct information on the incident.

But the report by ISR gives clean chit to ONGC and Niko. It blames aquaculture activities. It also dismisses any seismic activity in the area in the recent times. It suggests that the bunds which are prepared on ponds to retain water should be removed and ponds not be filled.


Environmentalists and activists are unhappy over the report. They say it is all a gimmick to divert attention. “The report is bogus. If the ponds are the reason then such incidents would have happened earlier as well,” says M S H Sheikh, an environmental activist in the region.