Report on financial relations of developing countries and IFIs 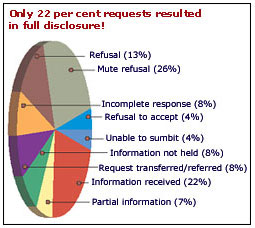 • International finacial institutions (IFIs) are powerful. IFIs get into contractual agreements with borrowing governments and, in turn, the citizens of these countries are bound by the terms of these agreements. But citizens have virtually no say in the negotiations -- in terms of knowhow or choice -- that affect their lives in a big way

• 24 questions were devised for each of the five countries. So, a total of 120 requests for information were submitted to IFIs as well as the five governments involved. These requests included information on institutional and policy decisions (like summary of board meetings and country assistance strategies), and on specific country-based projects (like environment impact assessment and loan contracts)

• With an apparent commitment to transparency in their business practices and policy framework, IFIs have to take the public into confidence. But, in reality, IFIs' behaviour is inconsistent and lacks proper procedure. Hence, there is no interaction with public 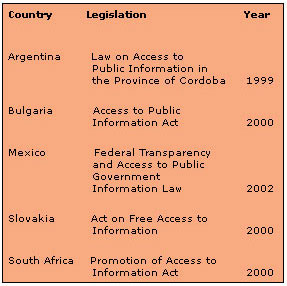 • Though IFIs engagement is public in nature, they often involve private sector operations. This invariably results in lopsided compromises between confidentiality (in private business) and disclosure (in public finance). Disclosure is usually the casualty

• Countries where IFIs operate have domestic laws on disclosure of information. These laws are effective in giving public access to crucial information. But such laws vary from country to country Disclosure in Bulgaria was found to be the best. Slovakia had the best disclosure system in place. Argentina, South Africa and Mexico fared poorly. Democracy works differently in North and South

• Among IFIs, the World Bank produced maximum disclosure. But it is inconsistent. Similar documents were available for Argentina and Bulgaria, but notfor Mexico, Slovakia and South Africa

• For 55 identical requests to IFIs and governments...
...IFIs fared 25 per cent better than national governments.
...Governments fared better than IFIs in 33 per cent.
...In 42 per cent of the questions, the answers were the same.