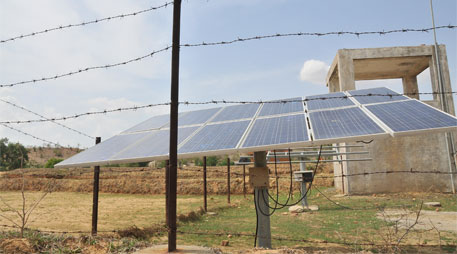 The report adds that grid extension effort by governments in Africa is falling short of the population growth. The number of people in the continent living in areas without access to power grids is expected to rise to about 700 million by 2030. As of now, 465 million people in rural areas and 121 million in urban areas lack access to grids.

In Africa, most people rely on traditional means of lighting such as candles, wick lamps and torches. These are not only expensive, but also dangerous. Kerosene is not only pricey, it is hazardous too. Stoves and lamps can easily catch fire. Indoor fumes cause 600,000 preventable deaths a year in Africa, the report says.

Traditional means of lighting are also harmful for the environment and contribute greatly to climate change. UNEP estimates that burning of fossil fuels for lighting purposes currently accounts for 90 million tonnes of carbon dioxide annually. It has been estimated that 270,000 tonnes of black carbon are emitted annually from kerosene lamps.

By switching over to efficient, off-grid lighting, developing countries can secure large annual savings from reduced use of fuel-based lighting sources, the report says.

“On an average, 76 per cent of the population in West Africa lacks access to electricity and spends up to 20 per cent of the household budget on kerosene, which is potentially damaging to their health and detrimental to the planet’s climate,” said Achim Steiner, United Nations under-secretary-general and UNEP executive director.

“Adopting modern, solar-powered solutions could provide these households with less expensive, more-efficient and healthier source of electricity, while boosting productivity and job creation.”

Market-based approaches have led to an unprecedented increase in adoption of solar lighting products. Government efforts, in cooperation with the private sector and the civil society, will contribute to an increased penetration of off-grid lighting products, the report says.

Partnerships between the public and private sectors can in many ways help to increase the market penetration of clean and efficient off-grid lighting.
If the government and the private sectors work together, the market can grow at a higher speed and provide more households with basic energy access and clean lighting facilities faster, the report adds.

The growth of renewable energy has changed the energy business in India. It has, in many ways, democratised energy production and consumption in the country. Gujarat, Andhra Pradesh, Uttarakhand, Karnataka, and Tamil Nadu have policies to promote solar energy generation from rooftops of residential, commercial and industrial buildings. The response to these policies has been highly encouraging.

India is the only country which is investing in big solar photo voltaic (PV) projects. The country has installed 2,000 MW grid-connected plants, mostly in Gujarat and Rajasthan. In the past five years, the price of solar energy has halved and this is a positive sign.