The industry throws its mantle to the Indian Institutes of Technology 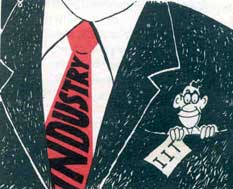 TEMPLES of higher technical learning in India have finally admitted some new converts in their hallowed corridors. The Confederation of Indian Industries (CII), and the Federation of the Indian Chambers of Commerce and Industry, offered 6 Indian Institutes of Technology (IIT) money and expertise to commercialise their research. In exchange, the IITs have cautiously offered their pool of knowledge and labs. The Union ministry of human resource development, hard pressed for funds, was happy to proselytize to both, the virtues of a mutual alliance. And a 7-member synergy group -- a mix of industrialists, government officials and iit bigwigs -- was formed on July 24 to oversee this symbiosis.

Says V K Raju, director, iit, Delhi, "The iits are subsidised 90 per cent by the government. iit Delhi recieves grants worth about Rs 33 crore every year. It costs the government Rs 50,000 a year to educate a single student. This year 800 students will graduate. About 30 per cent will flee abroad. Nine out of 10 students will find employment in the industry. Only 1 will opt for research or teaching."

Points out N Srinivasan of cii, "The syllabus is too theoretical and students lack floorshop experience. The iits must "customise" their syllabus and teaching methods to suit the Indian engineering scenario."

The Indian industry has never shown any respect for indigenous science, comments P V Indiresan, former director, iit Madras, and member of the synergy group. But today, it has to look inwards for technology. Because of the government's policy of liberalisation, it faces competition from multinationals. The industry spends a measly 1 per cent of its turnover on r&d, and needs to upgrade.

In 1992, the Foundation of Innovation and Technology Transfer (fitt), a private company was set up in iit Delhi's precincts to sell their skills to various companies. So far, its main client has been the government. Says A K Sengupta, director, "Out of 100 doctorates this year, there is not 1 which I can commercialise. Professors write research papers on subjects which they think might be of interest to the industry." Last year, consultancy brought in 1.8 crore. fitt now offers corporate membership to the industry.

However, some money has begun to flow into the iits. V K Modi of Modi Xerox already graces iit Delhi's governing board and offers a "design award" of Rs 20,000 to students for working in the area of office equipment. The Dalmia Research Foundation offers Rs 25 lakh per year for the next 3 years for a research programme entitled "Management Practices in Asia".

All this would lead to major structural changes in the iits. Short-term courses would be offered to students, related to the industry's specific needs and they will be sent to work at the shopfloor level in factories during summer vacations.

The faculty would undergo changes, too. Says Raju, "New faculty members will need to be familiar with the inner workings of the industry before they join up." Apart from teaching there will be research and consultancy. Payments for consultancy will be worked out by the teachers and the iit will charge about 30 per cent to meet the overhead costs. The teachers will retain ownership of patent rights.