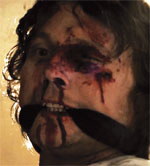 In a research station in Antarctica, things go wrong. Cut off from the outside world, the small community gradually becomes fractured and antagonistic and a killer emerges. In the isolated group, members are picked off one by one, paranoia ensues and no one is safe. This is an episode in Scottish climbing instructor and documentary-maker Kirk Watson’s new film South of Sanity. Watson shot the film while working for the British Antarctic Survey (BAS).

Shot entirely in the Antarctic, the horror movie’s cast and crew comprised fellow BAS contractors and staff. Matt Edwards, a doctor who lives near London, wrote the script for the feature which is now being marketed by a US filmmaker. “We filmed a couple of day scenes on a weekend and the rest was shot in the dark just to make the film darker,” Watson said. “So our actors suffered a bit in the cold as we had people sitting outside for ages, or playing dead people lying in the snow.”