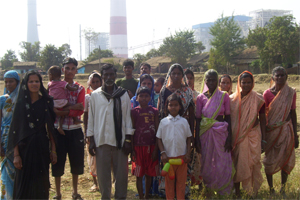 Residents of village Ramatola, adjoining Adani Group’s power plant in Tiroda in Maharashtra's Gondia district, have been living in fear of forced eviction for the past one year. Now they fear for their lives as well.

On November 10, security guards from the power plant forcibly took away four youth from the village into the power plant premises. This was after village residents opposed the digging up of their approach road by labourers engaged by the power plant. When a group of villagers went to the plant gate to enquire, guards attacked them with sticks. They, however, let off the youth who were locked  in the guard's room. While the scuffle was on, police arrived, and several villagers and a few police personnel received injuries. Lalita Kodwate fell unconscious after a she was hit on her head; she had to be hospitalised.

Later in the afternoon, when villagers went to the local police station, the police did not entertain their complaint against the plant managers and its employees. Instead, they arrested 22 residents—15 men and 7 women—and kept them in custody all night. The men were reportedly stripped and beaten with leather belts through the night for allegedly beating up policemen.
The incident has drawn the attention of the area leaders to the plight of the village trapped in the midst of development work, but to the villagers’ dismay, no action is being taken against the company.

In 2010, Adani acquired around 700 ha of land in Tiroda for expansion of its   1,890 MW under-construction power plant at Tiroda (capacity is to be enhanced to 3,300 MW), including the entire land of village Ramatola. While residents were compensated for their agricultural land, relocation of the homestead area has been hanging fire for the past one year.

“Evaluation at government rates has been done,” says Gendlal Bhonde, resident, “But it is grossly inadequate. Houses located on 1,000 to 2,000 sq metre, having six to seven rooms, godowns and cattle sheds have been valued at a mere Rs 50,000 to Rs 2 lakh.” Residents say Adani officials have been pressuring them to take this cash and move to their 200 sq metre rehabilitation plots at a site yet to be identified. “But that is impossible,” says Lalita Kodwate, “At current rates, we will need at least Rs 7 to 8 lakh per family to construct houses that meet our needs. Moreover, there are no facilities whatsoever at the rehabilitation site.”

Residents have also not been provided with any alternate livelihood. The Rs 7 lakh per acre (0.4 hectare) that they received as compensation is not enough to buy land. “We are saving the money for starting small businesses, but we can’t do that if we have to spend money constructing houses and facilities,” says Kodwate.

Meanwhile, ignoring the Maharashtra government’s guidelines. which state that rehabilitation must precede development work, Adanis have started construction work all around the village, barely 200 metres from the settlement area. “They have filled up our cattle pond with soil and uprooted the vegetation. There is no space to even defecate,” says resident Prabha Neware.

The construction work generates dust which has enveloped the village. In the past few days, coal has started arriving at the plant and it is being dumped right next to the settlement. “There is always thick dust in the air. In the afternoon, it is so thick we can’t eat our meals,” says Neware.
After the incident, elected representatives rushed to the spot, but residents complain no one is taking the violence seriously. District police superintendent, Chandrakishor Meena, has ordered an inquiry, but no police personnel have visited the village so far. Neither has any senior revenue official (tehsildar  (collector) visited them, say residents.

Elected leaders who did visit the village are downplaying the incident as a skirmish between labourers and villagers. Vijay Rahangdale, local Zilla Parishad member and chairperson of the rehabilitation committee for the power plant project, says the skirmish is the natural outcome of the village not being rehabilitated. “We are trying our best to resolve the issue.” He, however, admits that the rehabilitation provision is inadequate, and that the police action looks suspicious. “It does appear from this incident that the police are taking Adani’s side.”

Area MLA Khushal Bopche says he will raise the matter in the forthcoming winter session of the State Assembly. “The state government has been sitting on the rehabilitation proposal for the village, and that is what is causing the problem,” he says. “I will also talk to Adani about it.” Both, however, refuse to comment on Adani’s blatant violation of state government guidelines and carrying out construction around the village.

Vice president of the plant, O P Bharadwaj, proceeded on leave shortly after the incident, and was not available for comments. 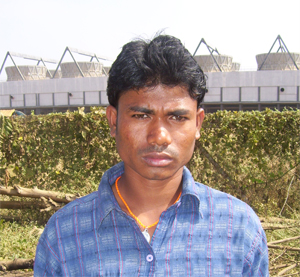 Residents insist that those who assaulted them should be brought to book. “For the past one year, Adani has been pressurising us to leave by accepting a pittance,” says Ajay Chaudhari, one of the youth, whisked away by the plant security guards. “After losing land, some women had started small shops adjoining the wire fencing of Adani plant's compound, selling tea, snacks and daily needs goods to plant workers. But Adani officials raised a three-and-a-half metre tin sheet fence to stop this exchange. “Then they filled up our pond so that our cattle have no water. Digging up the road was a deliberate provocation, since that road is our only contact with the world outside. This violence is just another pressure tactic to force us to leave,” says Chaudhari.

Villagers say that after the incident they are living in fear of further violence day and night. “We want protection so that we are not forced to leave before the rehabilitation negotiations are over,” says Sunita Karande, whose 15-year-old son Shubham was one of the four boys abducted by Adani guards, “We are filing a court case against the police and Adani.”

Villagers have also demanded speedy action on their rehabilitation demands. “We want a job for a member of each of the 136 families, all civic and community facilities at the rehabilitation site, adequate compensation for our houses, and a year’s time to move to the new location,” says Karande, Meanwhile, we want Adanis to stop construction around the village till we leave.