Camels are less susceptible to the medical condition than other animals, including humans 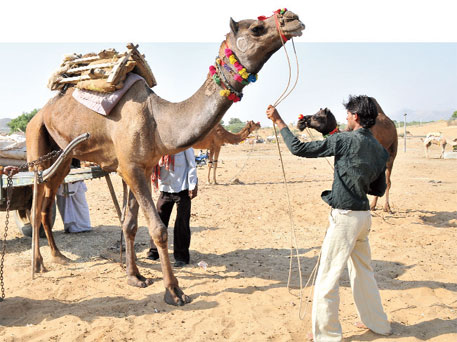 A SCIENTIST from a government college in Udaipur, Rajasthan, has found that compared to other animals, including human beings, camels are less prone to fluorosis. Fluorosis is a medical condition caused by excessive intake of fluoride. It is characterised by discolouration of the teeth, and in severe cases by dark brown stains. Understanding what protects camels from the disease could help find ways to protect other animals. Young adults of most species are susceptible to fluorosis.

It occurs mainly due to continuous intake of fluoride through water and diet. “In India, fluoride content in groundwater is relatively high in Rajasthan,” says the author of the study, S L Choubisa, professor and head of the zoology department of Government Meera Girls College, Udaipur. He says that fluoride levels in groundwater in Rajasthan are between 2.0 parts per million (ppm) and 5.7 ppm. Choubisa carried out a comparative fluoride study in animals and humans from 2011 to 2012 in the state. House-to-house surveys were carried out in nine villages of the Thar desert for examining fluorosis symptoms. Signs for dental and skeletal fluorosis were observed in 194 adult camels (over 5-year-old) and 43 juvenile/sub-adult camels (less than 5-year-old). Apart from camels, 210 adult and young bovines and 218 residents, including children, were examined for fluoride symptoms in the surveyed regions.

The results showed that 13.8 per cent of adult camels and 9.3 per cent of sub-adult camels were afflicted with mild to moderate forms of dental fluorosis, while the incidence of moderate forms of skeletal fluorosis was found to be 10.2 per cent and 2.3 per cent, respectively. However, the prevalence of dental fluorosis was found to be much higher and severe in bovines (61.9 per cent) and humans (58.6 per cent) than in camels, says Choubisa.

He also found a difference in the manifestation of fluorosis in camels and bovines. In cattle, the enamel of the anterior teeth was striated with deepbrown stains, whereas in camels it was non-striated and vertical with light brown stains.

Choubisa says that since camels are adapted to arid environment and can live for days without water, their intake of fluoride-rich drinking water is comparatively less. He concludes that the severity of fluorosis is directly proportional to the frequency of fluoride intake.

“Another possible reason for camels being less susceptible to fluorosis might be the high amount of calcium and ascorbic acid (vitamin C) in their diet, which neutralises the effect of excess fluoride content. However, more studies are needed to arrive at any definite conclusion,” states Choubisa.

Devendra Swarup, former director of the Central Institute for Research on Goats, Mathura, Uttar Pradesh, cites a few reasons for the difference in fluoride susceptibility in animals. He says that unlike cattle and horses, which are grazers, camels and goats are browsers and eat plants and herbs rich in calcium and vitamin C. Grazers primarily eat grass while the diet of browsers includes mostly leaves and twigs.

“There appears to be some species resistance in camels and goats to fluoride toxicosis, and it needs to be investigated at the genomic level,” says Swarup. “Diet rich in vitamin C and calcium reduces chances of fluorosis and many natural herbs contain higher concentrations of these two nutrients.

The study was published in Current Science on December 25, 2013.