Amid the furore over a book by American historian Joseph Lelyveld that allegedly describes Mahatma Gandhi as a bisexual and a racist, the Centre is contemplating a law that would make showing any disrespect to the Father of the Nation an offence punishable with a jail term. 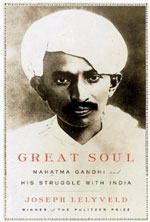 Law ministry officials told newspaper The Indian Express that the ministry had been asked to suggest an amendment to the Prevention of Insults to National Honour Act, 1971, making any action or gesture that shows disrespect to Gandhi an offence on a par with an offence against the national flag or the Constitution. Union Law Minister M Veerappa Moily told The Indian Express, “We cannot allow anybody to deni grate historical figures.”