A masterplan soon to make Lonar lake an eco-tourism spot 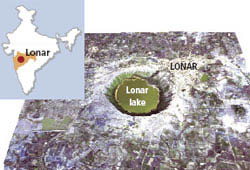 THE Nagpur bench of the Mumbai high court has ordered restoration of the world’s third largest meteorite lake in the Buldhana district of Maharashtra. A recent study by a group appointed by the court, pointed out that Lonar lake is a dumping ground for raw sewage from localities in the vicinity, making it unfit. The court formed two committees to oversee the restoration work on September 29.

Lawyer Kirti Nipankar filed a public interest litigation before the Nagpur bench in November 2009, demanding that dumping of sewage into the crater and seepage of fresh water, which is altering the pH of the lake’s salt water, be stopped; forests in its vicinity be restored. Speaking to Down To Earth, Nipankar said both the crater and temples surrounding have been neglected by every department. Following this, the court formed a three-member committee under retired forest principal chief conservator B K Singh to study the lake's condition and make recommendations.

A meeting was held in Mumbai by chief minister Ashok Chavan on October 11, in which decisions were taken to draw up a masterplan for restoration and to acquire 11 hectares of farmland in the lake’s vicinity. District collector N Ramaswami said negotiation with farmers for acquiring farmland has already started. The saltwater lake finds its first mention in the Skanda Purana, ancient Hindu scriptures. Activists are now demanding that world heritage status for it.