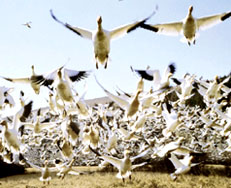 The study Avian Influenza and the Environment: An Ecohealth Perspective found that the loss of natural wetlands compels wild species to join domestic species in farm ponds and paddy fields. Though it is still controversial, many experts believe that wild birds carry bird flu viruses and their contact with domestic birds is a major reason for the spread of the disease.

The preliminary findings of the report were announced at a two-day seminar on bird flu held in the first half of April in Nairobi, Kenya, and organised by unep, the Convention on Migratory Species and the African Eurasian Water Bird Agreement.

The study also recommends relocating large poultry farms away from migratory bird flyways. Intensive poultry operations along migratory wild bird routes are incompatible with protecting the health of ecosystems that birds depend upon. They also increase the risk of transfer of pathogens between migrating birds and domestic fowl," it says. The spread of the disease also has brought the highly pathogenic h5n1 virus closer to human beings. More than 200 humans have been infected, of whom almost half died.

The report concludes that current measures to stop bird flu -- culling and isolation of flocks -- without wetlands restoration, will provide only limited short-term benefits. The experts point out that the impact of bird flu virus may extend far beyond direct infection of species and affect livelihoods and trade as countries take measures to combat the problem.